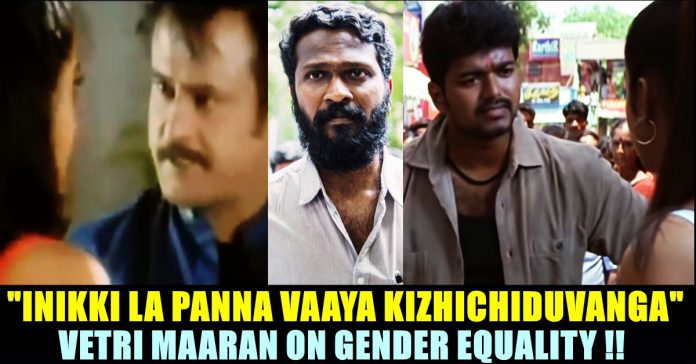 In one of his recent interviews, Director Vetri Maaran talked about how gender equality is being treated in Tamil cinema then and now. The filmmaker said that stars can’t draw boundaries to female characters nowadays and assured that audience would raise question. He believed that lot of things are changing today around the world and referred to his daughter’s perception towards happenings as a prime example. The filmmaker also pointed out how people would raise voice if a male protagonist demean women in their film like they did in the previous decades.

Director Vettri Maaran who is considered as one of the most progressive filmmakers of our era, is known for his sensible public statements and for the stand he takes in public issues. The 44 year old filmmaker who is currently busy planning for his next projects with actors Suriya and Soori, participated in a video interaction with Basu, former Indian cricket team trainer.

In the interaction, Vetri talked about various things including about how he tried to pursue a career in cricket during his earlier days, his future projects, importance of health, filmmakers around the world etc. He was also asked to answer on the existence of gender equality and the filmmaker said that he feels that things are changing.

“Lot of things are changing across the world nowadays.” Vetri said and went on to explain about the behaviour of his daughter Poonthendral as an instance. “If she was asked to do something, she gets very confused and questions why I shouldn’t do that particular work. Kids of the current generation are changing and they think differently” Vetri said.

“Though there are lot of problems needs to be sorted out in our society, they are being addressed and it has started” he said and described how dialogues in films demeaned women in the previous decades and how people would react if it happens now.

“At that time, dialogues oppressing women and demanding them to behave submissively were uttered by leading stars. But if such dialogues takes place in a film today, audience would raise question. Even huge stars will be severely trolled if they use such dialogues in their films” the national award winning filmmaker said.

Known for his socially responsible films, Vetri Maaran always raised voice for the oppressed through his films. His latest venture “Asuran”, an adaptation of Poomani’s novel “Vekkai” is one of the prime example for his concern over the oppressed people. For his production venture “Kaaka Muttai”, the film which talked about the lifestyle of two working children of Chennai slums, the filmmaker won awards as a producer as well. “Asuran” garnered national award for the best regional film category as well.

Previous articleCell Murugan Shared An Unseen Video Of Vivekh At Midnight & Got Emotional !!
Next articlePM Modi Caught Using Teleprompter ?? Got Trolled By Netizens