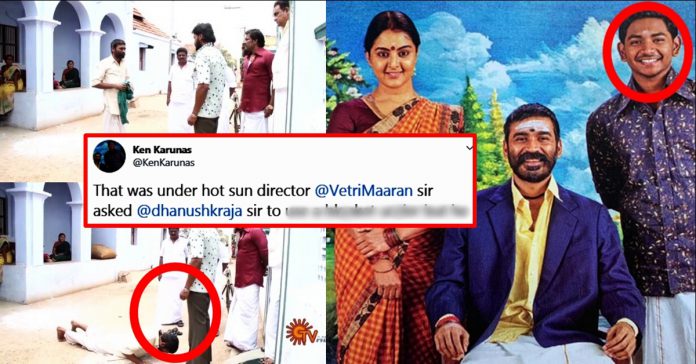 Danush-Vetri Maaran’s fourth collobaration Asuran hit screens last week and the audience of Tamil cinema who watched it are lauding it for the strong content and for the excellent performance from the actors of the movie.

The movie which revolves around the problems faced by Siva Sami, talks about many issues in the society of rural part of Tamilnadu in the early 60’s. Sivasami, whose small amount of property was targeted by a landlord, loses his elder in a disrupt cause by the antagonist. Followed by this, the protagonist who carries a dark past tries to overcome it by saving his younger son from the antagonists.

The film featured Dhanush in dual roles, playing his character over two generations. Despite being a violent film with a lot of bloodshed, the film managed to impress the family audience with good opening, revealed trade sources.

Now, Ken Karunas, who played the role of Chidambaram, younger son of the Danush has revealed an unknown fact about the movie. Sivasami (Danush) in an attempt of saving his son, would get humiliated by the antagonists who would demand him to fall on the feet of every house in the village. Sivasami, without hesitation, would fall on the feet of each member in every family.

Revealing a fact about this scene, Ken let his twitter followers know about the dedication level of Danush. He says that Danush was offered a blanket by director Vetri Maaran to act the scene. The debutant says that the actor refused it and fell on the feet of every house members in a bare street. He even said that the they shot the scene as a single continuous shot for 15 long minutes.

That was under hot sun director @VetriMaaran sir asked @dhanushkraja sir to use a blanket under but he fall on every house members on a narrow street that was a continuous shot with 3 camera for 15mins! Dedication of Dhanush sir stunned me undoubtedly! #Asuran #AsuranBlockbuster read the tweet of Ken whose father is actor Karunas.

That was under hot sun director @VetriMaaran sir asked @dhanushkraja sir to use a blanket under but he fall on every house members on a narrow street that was a continuous shot with 3 camera for 15mins! Dedication of Dhanush sir stunned me undoubtedly! #Asuran #AsuranBlockbuster pic.twitter.com/Df4o7xdrcK

Check out some of the reactions for this tweet of Ken :

thats a difference between a Wine shop and Library 🙂

Asuran marked the Tamil debut of Malayalam actor Manju Warrier, who played Dhanush’s wife in the film. Produced by Kalaipuli S Thanu, the film has music by GV Prakash Kumar and was predominantly shot in the interiors of Tamil Nadu.

What do you think on this dedication level of Danush ?? Comment your views !!

ADK’s Tweet About Vikraman After His Eviction Is Trending!!

ADK who got eliminated recently, has been tweeting about his opinions about the contestants and his relationship with them through tweets. Initially, he said...

“I Myself Called BIGG BOSS , They Doesn’t Called Me To Participate” – Rythvika Opens For The First Time !!

CHENNAI : Video Of Woman & Bus Conductor Fighting With Each Other Caused Ruckus !!

A video that shows a woman and a bus conductor attacking each other physically is going viral in social media platforms. The incident took...