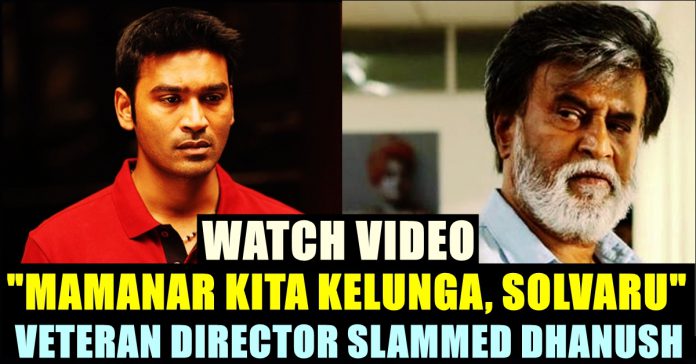 Veteran filmmaker Visu released a video expressing his disappointments over various people who didn’t give him credits while remaking his movies into other films. Meenakshisundaram Ramasamy Viswanthan who is widely called as Visu by the fans, is a famous actor, director, writer and talk show host. Some of his works are widely considered as the best till date. He is a former assistant director of late K.Balachander.

After coming know about that Dhanush is going to remake a cult classic film of his father-in-law Rajinikanth’s Netrikan, Visu decided to release a press statement through video interaction. Netrikkan is a 1981 drama film directed by S. P. Muthuraman and produced by K. Balachander’s Kavithalayaa Productions. The film featured Rajinikanth in double role as father and son with Saritha and Menaka in lead roles while Goundamani, Lakshmi and Sarath Babu play supporting roles.

In Dhanush’s version, Keerthy Suresh is reported to reprise the role played by her mother Menaka in Netrikan and pre production work for the remake has begun, according to reports. On seeing this news, Visu released a video accusing Pushpa Kandhaswamy, daughter of K. Balachander for selling the films of her without consulting with himself who owns the stories of them .

The veteran filmmaker says that the remake of “Thillu Mullu” was sold by Pushpa Kandaswamy to Vendhar movies without consulting the producers of the original version and himself who wrote the story and dialogue of it. “She bought the negative rights of the film and sold it to Madhan, the owner of Vendhar movies. Knowing this, daughter of Thillu Mullu’s producer, Kavitha raised question and the problem solved with a settlement to Kavitha. But both of them failed to consider me and didn’t think of getting my permission” said Visu in the 21 minutes video. “I kept quiet at that time only because of my master K. Balachander who was alive at that time” he added.

However the filmmaker filed a case against Pushpa Kandaswamy in court and is still awaiting for judgment. Visu further added that no one who remade his films in other languages thought of giving him what he deserves. “I worked as the leader of writers association for more than 8 years. If this happens to me then what about the new writers? I want justice for the future writers” he said in the video. He even directly asked Dhanush to inquire his father-in-law if he has any doubt against him in writing the story and dialogues of “Netrikan”. “You bought rights from Kavithalaya to remake Netrikan ? I am the writer of the film. If you have any doubt, ask you father-in-law. Ask Lakshmi amma or Keerthi Suresh’s mother Menaka or ask it to whoever you want.” said Visu in an aggressive way.

Further Visu revealed the reason why he didn’t approach Dhanush in person instead of releasing a video. He said that Dhanush’s first directorial “Power Paandi” is slightly based on a character from one of his movie and Dhanush didn’t give credit to him. “You didn’t even thank me when I tried to help you in the issue you faced with your birth. That made me to say this in a video instead of approaching you directly”. said Visu in the video.