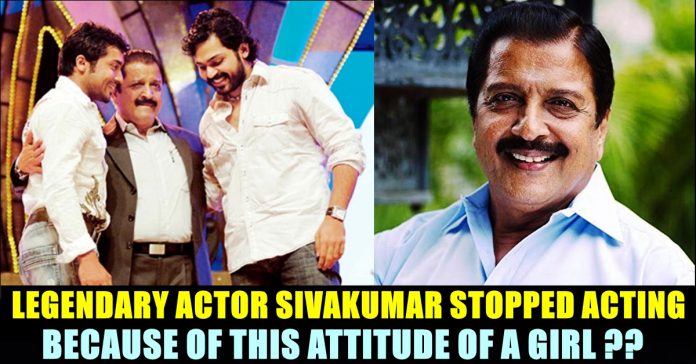 Veteran actor Sivakumar who had a huge fan base during his prime time, stopped acting after appearing in a number of TV serials during early 2000s. Being the father of most prolific actors Suriya and Karthi, Sivakumar’s decision of not acting in films and serials came in as a shock to his enormous number of fans and followers. Now, filmmaker and actor Chithra Lakshmana, in one of his youtube videos, has disclosed about the reason behind the decision of the “Sindhu Bhairavi” actor.

Siva kumar who got debuted A. C. Trilogchander’s Kakkum Karangal in the year 1953, has portrayed a wide range of leading and supporting roles onscreen in Tamil cinema and television. He has acted in over 190 movies in Tamil and several number of Television serials.

After his stint in Tamil cinema, Siva kumar gave a try in Television serials. He is well known for his role as Raadhika’s husband in the famous TV serial Chithi. However, after acting in “Annamalai” serial, the actor stopped appearing in films and serials despite of his seasoned acting ability. The most probable reason behind this decision of the actor was disclosed by director Chithra Lakshmanan in his youtube channel “Touring Talkies”.

The filmmaker said that an experience Sivakumar went through while acting for an emotional scene in a TV serial made him to quit acting. He said that the way a young girl treated the “acting” craft in a shooting spot, left him in a dejected state and made him to take the most important decision of his life.

After explaining an incident about how actor Siva Ganesan took a whole full day to prepare himself to perform a scene for one of his films, Chithra Lakshmanan revealed how actor Sivakumar got disrespected by a girl while trying to act in a scene with utmost dedication.

“Sivakumar was acting in an emotional scene with complete dedication. In a 10 feet distance, a girl who is also a part of that TV serial, was talking in her phone in a loud manner. Sivakumar, asked the young girl to be silent till he completes acting in that scene” Chithra Lakshmana started explaining the incident.

“The girl, instead of leaving the place, confronted Sivakumar saying “You are acting in film industry for so many years, don’t you know that you can manage the emotions during the dubbing session ?” and continued talking in her phone. Sivakumar decided to quit acting after experiencing that incident” the “Soora samharam” director said in his video.

“Is That Ajithkumar??” Samantha Can’t Keep Calm After Watching This Video

Chinmayi Called Out Youtuber Biriyani Man For His Reply To Lady Pista!!