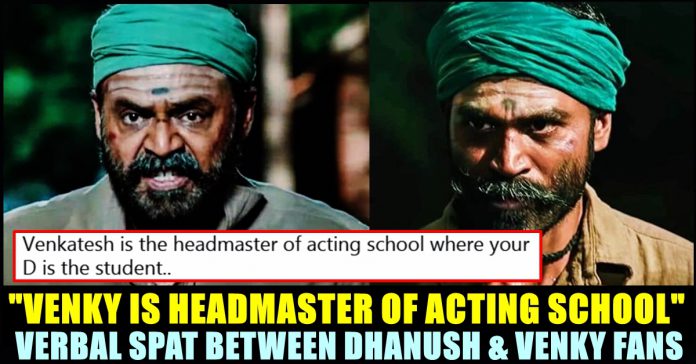 Ever since “Narappa” of Venkatesh released on Amazon Prime, fans of actors Dhanush and Venkatesh are involved in online verbal spat. They are trying to prove that their favourite actor had done justice for the script written by Vettri Maaran based on the novel “Vekkai”. It was initially made in Tamil as “Asuran” starring Dhanush and Manju Warrier in lead role. After the film became a huge success with a box office collection of Rs. 100 crores, the film went for a Telugu remake.

Titled as “Narappa”, Venkatesh and Priyamani justified Dhanush and Manju Warrier respectively. Reviews started pouring from all over the Internet as the film got released with huge anticipations among the fans. Despite of mostly favourable reviews that the film garnered, fans of actor Dhanush and Venkatesh started involving in online verbal spat between themselves to prove who did the best.

“Asuran” and “Narappa” revolves around the problems faced by a financially oppressed protagonist. It talks about many issues in the society of rural parts that took place in the early 60’s. As far as “Asuran” is concerned, Sivasami, whose small amount of property was targeted by a landlord, gets his elder son murdered by the landlord’s goons. Followed by this, the protagonist who carries a dark past tries to overcome the tragedy by saving his younger son from the antagonists.

Beyond Danush fans, the film is being appreciated by fans of all the categories for its intense content and the for the way the actors performed in it. Starring skilled actors such as Danush, Manju Varrier, Prakash raj and Pasupathi, the film also gave opportunities to newcomers such as Teejay, Ken Karunas, Abhirami. Now, after the release of the film’s Telugu version, fans of both the actors are slamming each other.

“Have you seen satruvu, dharma chakram and Ganesh. Watch Venky sir movies before you compare with dhanush. Venky sir is one of the finest actor. It will take ages for dhanush to reach Venky sir acting. Get some knowledge of movies before commenting.” a fan of Venkatesh said to which a fan from Tamil nadu replied writing “Venkatesh looks in his all recent movies like a doll. Dhanush has already reached the highest of VenkyDoll. Now Dhanush is doing an movie with Avengers Director in Hollywood and VenkyDoll still playing youngster roles”

Check out some of the reactions from the fans of both the actors :

Venkatesh looks in his all recent movies like a doll 😂😂😂😂. Dhanush has already reached the highest of VenkyDoll. Now Dhanush is doing an movie with Avengers Director in Hollywood and VenkyDoll still playing youngster roles 😂😂😂😂

#VenkateshDaggubati's performance in #Narappa is not just his best but a path breaking and milestone in #TFI ! Powerhouse of talent recognised yet again ! This is incomparable 🙌🙏 This is magic ✨ This is history in making !!!!

Venkatesh is the headmaster of acting school where your D is the student..
Venkatesh highest collection>>>>Dhanush https://t.co/WgYiViAdG7

@dhanushkraja was not even born when @VenkyMama started acting! Both the states know that Dhanush is nowhere near venkatesh in acting! Venkatesh nailed the emotional and action scenes!

Previous article“No Response After Payment” – Actress Reshmi Menon Exposed An Instagram Page !!
Next articleNidhhi Agerwal Got Upset On Seeing A Particular Picture Of Her Getting Circulated !!

List Of Top 5 Safest Areas For Working Women In Chennai.. Exclusively For Ladies!

Working women, especially single working women are consciously looking out for peaceful and safe areas where they can live, work and entertain. Here are...