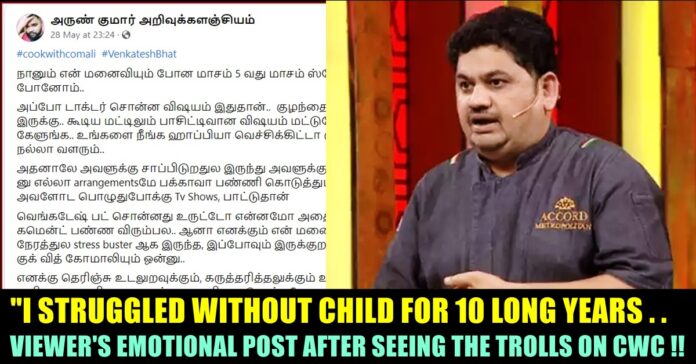 A Follower of “Cooku with Comali” show named Arunkumar Arivukalanjiyam, came up with a post in his Facebook handle, reacting to the trolls that surfaced against the statement made by Venkatesh Bhat, a famous chef and one of the judges of the reality comedy show. Arunkumar said that his wife is 5 months pregnant and the main suggestion of their doctor is to keep her happy as a result of which he made her watch her favourite shows including “Cooku with Comali”.

“Me and My wife went to scan for the 5th month as she was pregnant. This what Doctor said to us. .” said Arun said through his post and linked doctor’s suggestion with the statement made by Venkatesh Bhat in the “Cooku with Comali” show.

“Doctor said that the Baby is fine and asked her to watch and hear positive things as much as possible. “If you keep yourself happy, Baby will grow fine” is what the Doctor asked us to do” read the post of Arunkumar.

“As per the suggestion of our Doctor, right from food, I made all the arrangements such as Prime, Hotstar for her. Tv shows and songs are her entertainment” The viewer further said through her post.

“I don’t want to comment on whether Venkatesb Bhat lied in the show or not. But ” Cooku with Comali” is one the shows that acts as a stress buster for me and my wife. In my knowledge, for a healthy sexual intercourse and getting conceived, mental health is much more important than the physical health. If you have thousand problems running on your mind and trying to get a baby, even if you are physically fit, it won’t happen. I’m saying this through my experience” the follower further said. 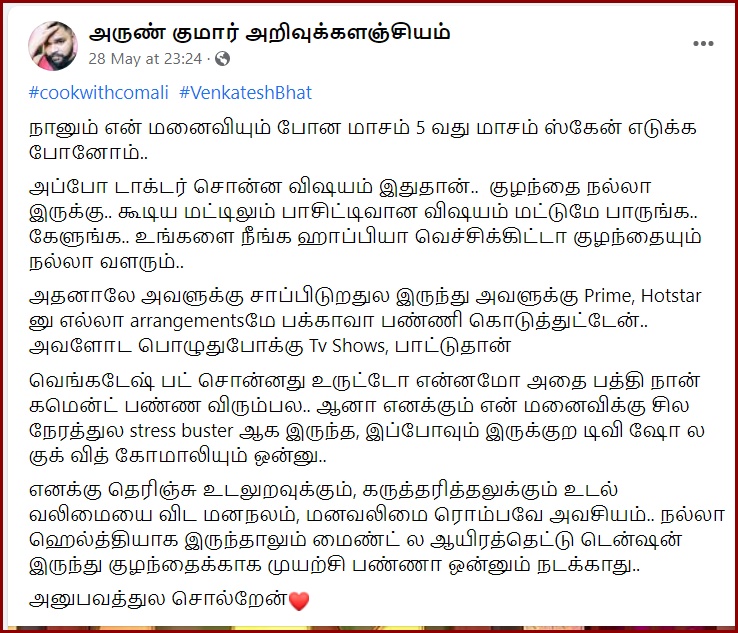 Many other posts from the viewers of the show surfaced in the internet. A user named Matilda who was struggling without a child for 10 long years, came up with an emotional post saying that all she wanted is to something to laugh at as she was extremely stressful while going through treatments for the child birth.

Renowned Chef Venkatesh Bhat who is participating in the most famous “Cooku with Comali” show as one of the judges, in a recent episode, had claimed that women became who were suffering in their life without a child, became successfully pregnant. Followed by him, Pugazh, a famous comedian of the show, said that a person personally told him that she decided not to commit suicide after watching the promo of the show.

“You won’t believe me, people have sent me messages saying that they got conceived after watching this show. I didn’t have child for 8 long years and went to hospital for IVF treatment. I saw a woman there with her child. She said that she went for IVF treatment forgetting all get problems after watching “Cooku with Comali”  show.She recommended her to watch the show and you will not believe that she is pregnant now” Bhat said in the show. This statement from the him, despite of having logic, became a subject to online trolls and memes.

Result On The First Elimination Of BIGG BOSS Ultimate Revealed !!

In the end, Mumbai Indians ended up edging the final by just one run, but they made it a lot tougher for themselves by...