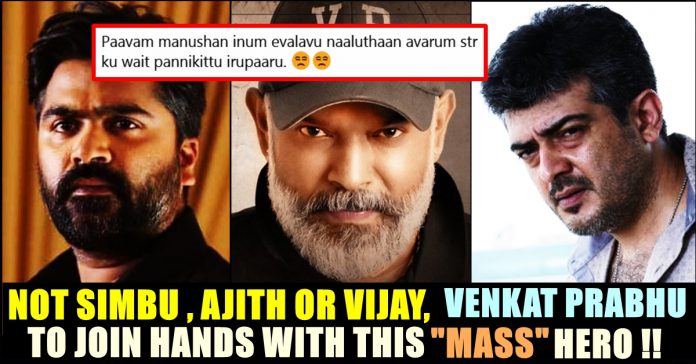 Venkat Prabhu , better known as an Indian filmmaker, who has worked as an actor, director and playback singer in the Tamil film Industry. After completing his education, he began pursuing an acting career, with his first three ventures featuring him in a starring role, failing to release, following which he began appearing in character roles.

He entered the spotlight for the first time when he turned director with the summer hit Chennai 28. He achieved further commercial successes with his subsequent directorials Saroja, Goa, Mankatha, Biriyani and Masss. His father Gangai Amaren is a film director and music director who is a brother of Music Maestro Ilayaraja.

The filmmaker whose last directorial was the sequel of his debut film, is not very much active in film industry right now. Chennai 28-2 was released during 2016 and the director’s Party was shelved due to some unknown reasons. After that he committed to do a project with Simbu under Suresh Kamatchi’s production which caught in controversy due to Simbu’s non-cooperation.

Lawrence who is busy in directing the hindi version of Kanchana 2, is also known for his “Hero” oriented films such as “Muni”, “Paandi”. This update from Venkat Prabhu made the audience to speculate that a film of Venkat Prabhu having Lawrence in the lead is going to happen in near future. Another set of fans guessed that Lawrence is going to play the role of villain in Simbu’s “Maanadu”. Few even commented “A Venkat Prabhu Venduthal” in the comment section of the filmmaker’s post in humorous manner.

What do you think on the decision made by both the creators ? Comment your views below !!

Previous articleUS Based Indian Asked Women To Carry Condom !! Chinmayi Exposed Him !!
Next articleRandom Guy Trolled BB Celebrity For Being “Short” !! Here’s Her Reply To Him !!

Woman Who Was Missing In Beach While Celebrating Her 2nd Anniversary, Found With Her Lover !!

In an unexpected turn of events, a woman who went to beach with her husband to celebrate her 2nd year marriage anniversary was missing...

Internet Demands Immediate Arrest Against The Guy Who Made The Threat !!

Enraged Internet users who follow cricket demanded immediate arrest against "Mr. Vijay 47" for the comments he wrote in the social media posts of...