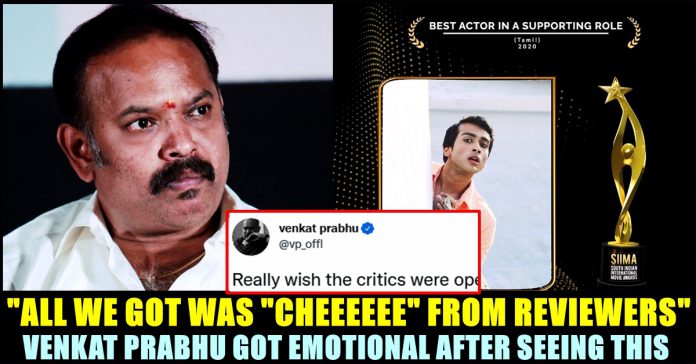 Director Venkat Prabhu got emotional and expressed his displeasure over how critics received a character he made for his 2010 film “Goa” after seeing Kalidas winning an award for playing “Sathar” in Sudha Kongara’s “Paava Kadhaigal”. The filmmaker said that all he got was “Cheeee” from the reviews and reviewers for the character played by Sampath in his film. He also congratulated the young lad for receiving “SIIMA” award for playing “Sathar”.

Being one of the prominent filmmakers of Tamil film industry, Venkat Prabhu is currently busy making “Maanadu” of Simbu and has been trying to find his old form for the past few years. One of his directorials “Party” is not seeing the light due to unknown reasons whereas his last feature film Chennai 28-2 was released in the year 2016. Apart from a short in “Kutti Story”, a Tamil anthology flick, Venkat hasn’t seen any releases for the past 5 years.

On 20th of September, “South Indian International Movie Awards” uploaded a post recognizing Kalidas Jayaraj who played a transgender character in the recently released short film “Thangam” that featured in “Paava Kadhaigal” anthology film. “Kalidas is the winner of the Best Actor In A Supporting Role (Tamil) award for the movie Thangam (Paava Kadhaigal)! Applause mandatory!” read the caption of SIIMA.

. @kalidas700 is the winner of the Best Actor In A Supporting Role (Tamil) award for the movie Thangam (Paava Kadhaigal)! Applause mandatory! #SIIMA2020 #SIIMA2021 pic.twitter.com/uD053STuC7

On seeing the announcement, Director Venkat Prabhu uploaded a tweet expressing his displeasure over how reviewers received the character played by Sampath in Goa. The filmmaker felt bad as many expressed disgustful opinions on the character. “Really wish the critics were open like this then!! #Sampath from #Goa deserved more accolades! But never got recognised for the role he played!! Sad but true!! All we got was cheeeeeee from reviews and reviewers for the role he portrayed. happy for u” Venkat Prabhu said in his tweet.

Really wish the critics were open like this then!! #Sampath from #Goa deserved more accolades! But never got recognised for the role he played!! Sad but true!! All we got was cheeeeeee from reviews and reviewers for the role he potrayed 😊happy for u @kalidas700 👍🏽 https://t.co/XstyWMCEcq

In the film “Goa”, Sampath played the role of a transgender man named “Daniel”. Aravindh Akash appeared as Jack, his love interest. The film showed Daniel being affectionate towards Sami kannu, played by Premji and Jack getting jealous over them. Check out some of the reactions tht surfaced for Venkat Prabhu’s tweet :

True Vp sir. It takes a broader mindset for people to accept that sir. We are in India where people feud with each other on the basis of language, caste, religion, race etc. Let it alone for them to understand the LGBT feelings. Now after all these years i feel its much better

You were always way ahead in movie making! TBH that time it was bold one to do!

Sampath Deserves More Awards. He has Great Command in Acting with a Terrific Voice.

Yes.. But the point to be noticed here is the intense , grieve, hatredness of the role played by Kalidas.
But sympath just played a fun part out of it..
You are comparing Asuran with sullan.

Honestly, I never thought sampanth played a trans character in that age…
Thought that's how the body language of anglo Indians will be..🙊🙊
Goa released when I was in 7th std.

Previous article“You Are A Tamilian, Why English Title?” Questioned Reporter !! Check How Sivakarthikeyan Handled
Next articleDale Steyn Gets Slammed By The CSK Fans On His Comment On Raina!!

Chennai completed the double against Rajasthan this season, with Mahendra Singh Dhoni becoming the first player to captain a side to 100 victories in...