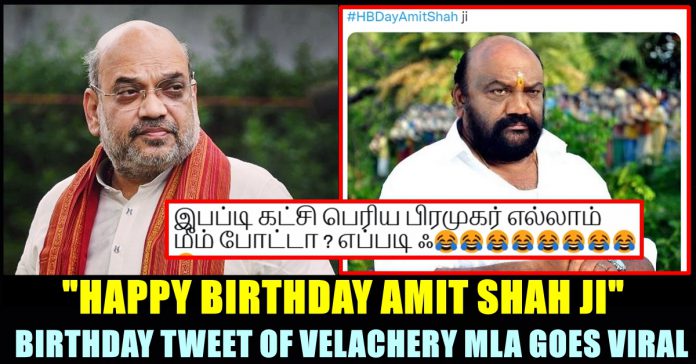 On Friday, Political leaders from various parties extended their greetings to Union home minister Amit Shah on his 57th birthday. Prime minister Narender Modi, while wishing Amit Shah, said “Birthday greetings to Shri @AmitShah Ji. I have worked with Amit Bhai for several years and witnessed his outstanding contributions to strengthen the Party and in Government. May he keep serving the nation with the same zeal. Praying for his good health and long life” in his tweet.

Birthday greetings to Shri @AmitShah Ji. I have worked with Amit Bhai for several years and witnessed his outstanding contributions to strengthen the Party and in Government. May he keep serving the nation with the same zeal. Praying for his good health and long life.

The post garnered huge reception with Twitter users flooding the comment section with hilarious reactions. A twitter user, in a humorous note, said that it is a disgrace to compare Santhana Bharathi, a reputed director with Amit Shah. Check out some of the reactions below :

Great artist.. I have seen Shah ji in most of the Kamal Hassan movies. His role in #AnbeSivam is ultimate 💕

Comparing such a nice nan with the Gujarat goonda is rombo pavam.

Amit Shah born on 22nd of October 1964 and served as a minister under then-Gujarat chief minister Narendra Modi for several years. In the year 2014, when Modi became Prime minister, Shah was made the national president of the BJP, succeeding Rajnath Singh who became the Union home minister. Shah was inducted into the Union cabinet as home minister, when Modi was re-elected in the year 2019. In January 2020, JP Nadda succeeded Amit Shah as BJP president.

Comment your views on this wishes made by the MLA of Velachery constituency !!

An old Facebook post uploaded by lyricist Kabilan's daughter Thoorigai about suicide in the year 2020 got resurfaced in internet and is going viral....