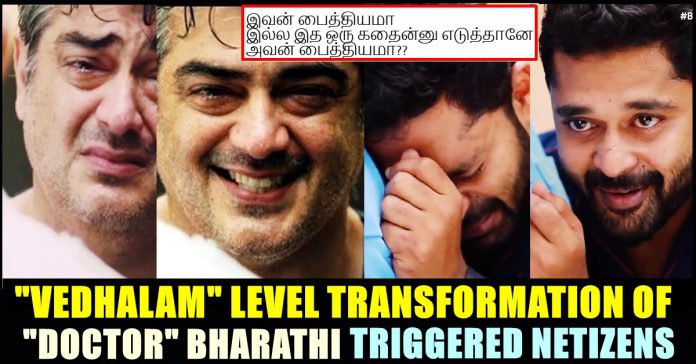 A recent promotional video uploaded in the official social media handles of Vijay Television, based on the widely watched “Bharathi Kannamma” serial which showed the titular character transforming from one emotion to another, has grabbed the attention of the online users. Many compared it with the most famous transformation scene that took place in Ajith kumar’s “Vedhalam” movie and trolled Bharathi and the makers of “Bharathi Kannamma” for trying to pull off something similar. After crying, Bharathi says that he did it to check the reactions of his family members. Those who are keenly watching the soap, asked why he showed similar emotion while being alone and questioned whether he tried to see the reaction of the audience.

“Bharathi Kannamma” is one of the widely watched serials that is being streamed on Vijay Television in the weekdays. The serial which enjoys genuine followers, also getting subjected to trolls every now and then, due to the decisions of the lead characters. Bharathi, the male lead doubts his wife of cheating him and refuses to live with her whereas Kannamma, the female lead decides to live away from him to prove that she could lead a life without his financial support.

In a recent promo, Bharathi, with a sad face confessed to his mother that he could have doubted Kannamma’s character mistakenly and expressed his wish of living with her. Watch the promo below :

In a recent promo, Bharathi changes his emotion from being sad to normal and says that he did it only to check emotions of his parents. “You people are expecting me to talk that way, right ? That’s why I talked that way and checked how you all are reacting.” Bharathi says.

Many got reminded of the popular transformation scene in “Vedhalam” movie and started trolling Bharathi for trying such thing in his own house, in front of his own parents. “Why did you felt sad while being alone, to check our emotion ?” a twitter user asked to troll the logic flow of the serial. Check out some of the reactions below :

I think its time i let this go, focus on Pandyan Stores maybe and learn some pottery too with the new extra 30 mins of my life.Bharathi you piece of shit. https://t.co/xb0i6PBS3B