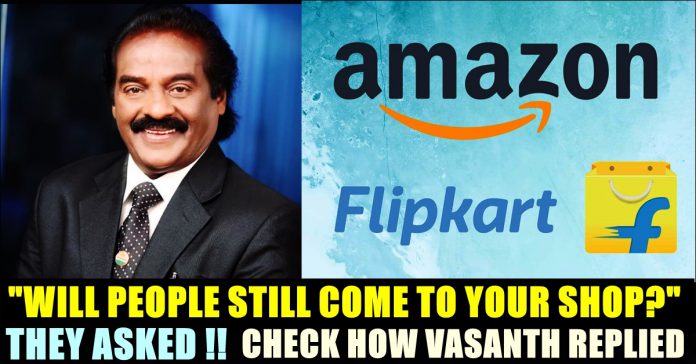 Vasantha Kumar, founder of India’s one of the largest home appliances firm Vasanth & co died on Friday after combatting Covid 19 for three long weeks. Entire country griefed over the veteran’s demise who served as Tamilnadu member of Parliament from Kanyakumari. Now, journalist Aavudaiappan who is known for hosting shows with Behindwoods youtube channel, shared a fond memory of Vasantha Kumar. He shared on how Vasantha kumar answered to someone who asked him about the emergence of online shopping portals.

Vasanthakumar who was admitted in Chennai’s Apollo hospital on 10th of August, passed away on Friday at 7 : 07 PM. He was 70 year old. Vasanthakumar is known for initiating Tamil nadu’s biggest appliances retail chain Vasanth and Co. He started his business career as a salesman during seventies. He who got elected as MLA for two times from Nanguneri constituency in 2006 and 2016, resigned from his seat after successfully contesting from Kanyakumari Parliamentary constituency in the 2019 Lok Sabha election. He defeated the sitting MP and then Union minister Pon Radhakrishnan by a huge margin.

His Vasanth & Co grew to be a household name in the state with almost 90 showrooms across Tamil nadu and Pudhucherry. He also ran a TV channel named as Vasanth TV. It is notable that Vasanthakumar is a brother of veteran congress leader Kumari Ananthan. Tamilisai Soundararajan who is serving as Telangana’s governor is his niece.

The veteran business man reportedly said that people of our country would always like to “touch” things before buying them. “That won’t happen in online shopping” said Vasantha kumar according to the tweet of the Journalist. “That is when I realized why I was interested in buying phone, headphone and case in online and my father interested in buying things in shops.” he said in his tweet.

“He was very much aware of the poor people’s pulse. He is a pioneer to those who are aiming to become an entrepreneur from a simple background” Aavudai lauded the businessman.

From Prime minister Narendra Modi to Makkal Needhi Maiam president Kamal Haasan, celebrities and politicians prayed for Vasantha Kumar’s soul to rest in peace. Let us pray for the same !!