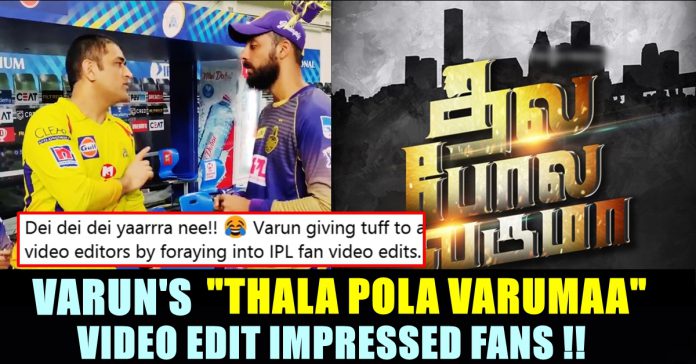 Varun Chakravarty is having his dream IPL as he got selected for the Indian team while playing for Kolkata Knight riders and took his dream wicket of MS Dhoni twice in the same season. After taking Dhoni’s wicket for the second consecutive time, the youngster had some time with the former Indian captain post the match. I

n the video which got released, Dhoni could be seen giving inputs to Varun from his experience. Now, the Tamil speaking mystery spinner, uploaded the same video by adding “Thala Pola Varuma” song in the background which impressed the online fans of Dhoni and CSK happy.

In the 49th league match of IPL tournament, Chennai Super Kings met Kolkata Knight riders for the second time. Dhoni, who came in as a two down batsman, tried to stay there till the end to finish the match. However, Chakravarthy, during his final over of match, dismissed Dhoni in a similar way of dismissing him in the previous fixture of the two teams. In the 4 overs Varun bowled, Varun conceded only 20 runs and picked two wickets. In the tournament, he took 15 wickets so far which includes a fifer.

After the match, Dhoni who signed jerseys for the players like Rana, Kuldeep and others, had a conversation with Varun Chakravarthy who took his wicket twice. Adding the short video clip, the official twitter handle of Kolkata Knight Riders wrote “From admiring him from the stands at Chepauk, to now…😍 @chakaravarthy29’s fairytale continues!” as caption.

Now, Varun edited the video with “Thala pola varumaa” song in the background and uploaded in his official twitter handle. “Thank you for sharing some wise words and for inspiring. Thala Pola Varumaa” he wrote as his post’s caption.

Srini mama, a popular parody account of CSK owner Srinivasan was taken a bit aback by seeing the video editing skill of Varun. He said that Varun is giving tough to fans in making fan video edits.

Being an ardent fan of actor Vijay, Varun made a video edit for his “Kaththi” film years back. Here’s the video :

How many Remember this Edit..!
This Edit was done by Our Very Own TN Cricketer #VarunChakravarthy bro…Present @KKRiders
player..! 😎🔥 Proud Of You Brother..! #Master @actorvijay pic.twitter.com/Lc7jzqVTll

“Three years back I used to come to the Chepauk stand and sit with the crowd just to see Dhoni batting. Now, I bowled against him, it was a surreal moment for me. After the match, I took a picture with Dhoni sir.” said Varun Chakravarty after taking the wicket of Dhoni in the first match. He went on to say that he wants to say just one thing in Tamil and said “Thala Thala Thaan”

Let us wish Varun to have an excellent debut in Australia !!

Previous articleThis Tweet Of Mumbai Indians About SKY & Kohli Irked Fans !!
Next articleSamantha Got Trolled For Her BIGG BOSS Post !! Check Her Reply

Actor-turned-politician Kamal Haasan turns 65 today. The year also marks his sixty years in Indian cinema. He made his debut in films as a...