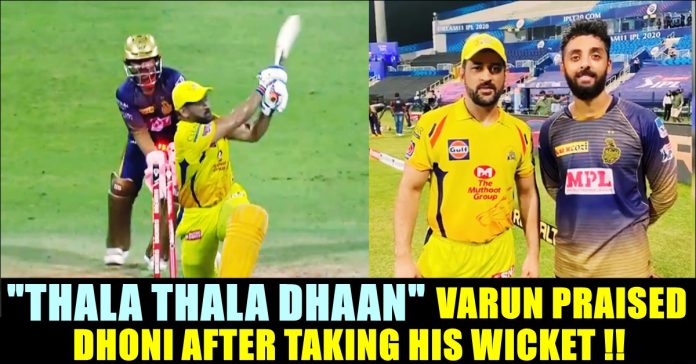 During the match between Chennai Super Kings and Kolkata Knight Riders, Abhinav Mukund who was in the CSK squad once was doing Tamil commentary. He said that Dhoni would repeatedly ask Varun, a Tamil nadu based bowler to bowl for him in the net session as he found it difficult to face his spin. As an extension of it, last night Dhoni completely missed to meet the ballof the mystery spinner and got bowled. The vital moment helped the KKR team to clinch the victory effortlessly as Kedhar Jadhav couldn’t middle the ball well.

In the post match interview, Varun who sent Dhoni to the pavilion said that the moment he took the legendary batsman’s wicket was surreal. When he was asked whether he felt the pressure while bowling to MSD, Varun said “Ya.. Yaa.. because, three years back I used to come to the Chepauk stand and sit with the crowd just to see Dhoni batting. Now, I bowled against him, it was a surreal moment for me. After the match, I took a picture with Dhoni sir.” said Varun Chakravarty.

Varun Chakravarty rose to fame by playing matches in the TNPL league with a bowling action resembling Sri lankan spinner Ajantha Mendis. Varun started his cricket career as a wicket-keeper in his school days. Then turned into a medium-pacer as he grew up before quitting a high profile architect job and eventually settled with bowling spin, thanks to his knee injury.

After Tamil nadu selectors enrolled him for the TN state side for the Vijay Hazare trophy 20198/19, he was snapped up by KX1P in the IPL auctions for a whopping sum of Rs.8.4 crores ahead of the 2019 season. Now, he is playing for the Kolkata Knight riders team under Dinesh Karthik’s captaincy.

The way Varun expressed his love towards Dhoni, impressed the fans of the former Indian captain. The phrase “Thala Thala Thaan” is widely used by the popular parody account of N. Srinivasan, owner of Chennai Super Kings team. Followers suggested “Mama” to ask patent to Varun for using his lines.

Let us wish Varun the very best to perform well in the upcoming matches and to seal a permanent place in the national team soon !!

Actress Samantha Ruth Prabhu who is pretty much busy signing films in various languages, has been leaving her fans and co-stars stunned through the...