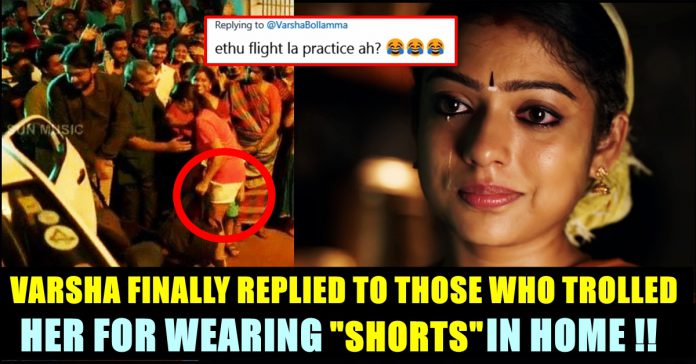 Apart from Vijay, Nayanthara and Jackie Sheroff, the film also had 11 girls as football players. Indhuja Ravichander, Amritha Iyer, Varsha Bollamma are few of them who grabbed the attention of the audience. Though the film widely appreciated by the majority number of audience, the logic loopholes in the film heavily criticized by few who watched the movie.

One of a scene which involved Varsha Bollamma was also heavily trolled for the way it was shot. The actress who played the role of a housewife, initially would not be allowed by her husband to play football. After a brainstorming session from Nayanthara, he would accept his wife to play for the national team.

During the song “Singapenne”, a montage sequence would show her getting blessings from her relatives before travelling to Delhi for her matches. What grabbed the attention of the audience more was that the actress would be seen wearing shorts while going from home. This raised the eyebrow of many fans as there is no necessary for a football player to wear shorts while getting ready to reach the destination of the match venue.

Ufffooo these butthurt misogynistic/patriarchal folks give new definition to feminism every single day. Today, it is the small shorts Varsha wears in Bigil when she leaves in car it seems 😐 #NaethikuDupatta#IndraikkuShorts #NaalikuYaarodaJattiAhKaataPorano

Now in a way of replying to all the trolls, Varsha Bollamma has came up with a meme to reply them. The meme humorously said that the character Gayathri wore shorts to practice football in the flight during the 2 hours of travelling time.

While sharing the meme, Varsha said that it is the answer for those who questioned her. Check out her tweet below :

What do you think on this reply of Varsha ?? Comment your views below !!

Previous articleParthiban Hints Blockbuster”Andhadhun” Is A Copy Of His Film ??
Next articlePopular Actress Facing The Wrath Of Public For Cursing A Child !! WATCH !!

A number of female Instagram users, accused a celebrity photographer named Prashanth for sexually harassing them through the photo/video posting online app. Screenshots of...

The Most Expected “Arabic Kuthu” From “Beast” Is A Copy Of This Famous Track ??

On Monday, makers of "Beast" came up with a skit video releasing the promo of first ever single from the Vijay starrer. Titled as...