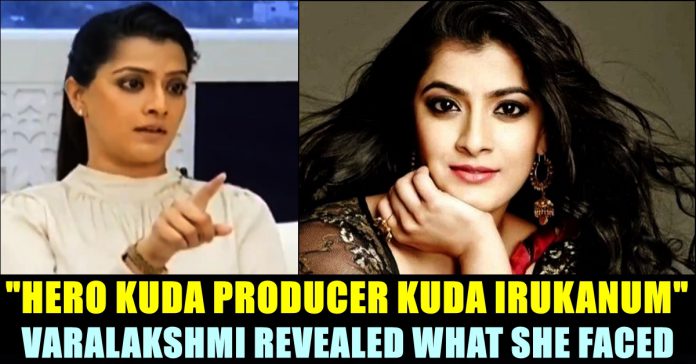 Actress Varalakshmi Sarathkumar who is known among Tamil audience for appearing in films like Podaa Podee, Sarkar has opened on casting couch. The actress who is known for her outspoken attitude, grabbed headlines in previous occasions. In a recent interaction with News18 Tamilnadu , the actress said that she herself faced casting couch in her acting career.

When she was questioned by the anchor about the problems faced by actresses in Tamil cinema, Varalakshmi said that she faced all these problems in her career and she learnt to say “no”. “It is a choice they are making. I have faced all these stories but I have learnt to say “no”. Knowing that I am a daughter of Sarathkumar, it is happening. I have heard recorded phone calls in which they will say that I won’t cooperate with their requirements” said Varalakshmi in the interaction.

“They said that a heroine should sleep with Hero and producer. I don’t want an opportunity like that. I have learnt to say “no”. Yes I accept that it got delayed for me to grow in my career. Lot of people didn’t accept me to act in their films just because I was too correct. But That’s fine. Now I have completed 25 films. I worked with 25 best producers and with 25 best directors. I am signing my 29th film next. So I am happy” said Varalakshmi Sarathkumar.

Varalakshmi debuted to Tamil film industry through Vignesh Shivan’s Podaa Podee in which she paired along with Silambarasan aka STR. Her roles in Thaarai Thappatai, Sarkar were highly appreciated by the critics. On the work front, Varalakshmi is all set to appear in Velvet Nagaram as a solo lead. Varalaxmi also turned as Host for a TV show titled “Unnai Arindaal” which will be aired on every Sunday in Jaya TV.

Comment your views on this revelation of Varalakshmi Sarathkumar !!

AR Murugadoss’ Sarkar has set a new benchmark by crossing 13 million plus views in record time. The first teaser was released on Friday. Soon after,...

“I Have Crossed All My Boundaries” – Celebrity Photographer Prashanth

After being called out by several women in social media, famous photographer named Prashanth came up with a post in his Instagram handle, seeking...