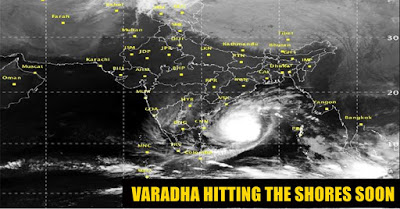 Varadha Cyclone Would Not Go Soft On The Shores

The expected monsoon rains have been scarce. The cauvery issue has become more tensed since. The farmers were hoping against hope to keep crops alive. And then came the expected Nada Cyclone. A depression turned cyclone which was expected to bring enough rainfall to sustain for few more months. But again it was not as expected and rain was scarce at many parts. Now another depression turned Cyclone, the Varadha is expected to hit the coast between Chennai and Nellore some time in the afternoon.

The Cyclone Warning Center,Vishakapatnam announced that the Varadha lay centered at around 390 kms to the east on Nellore and 330 km east of Chennai by Sunday evening.

By current situation (10Am-December 12) the cyclone is centered around 120km outside the coast of Chennai.

The Tamil Nadu government has issued an advisory directing all schools and colleges in Chennai to remain closed.

Previous articleA Country That Imports Garbage?
Next articleThings You Dont Know About These Celebrities.