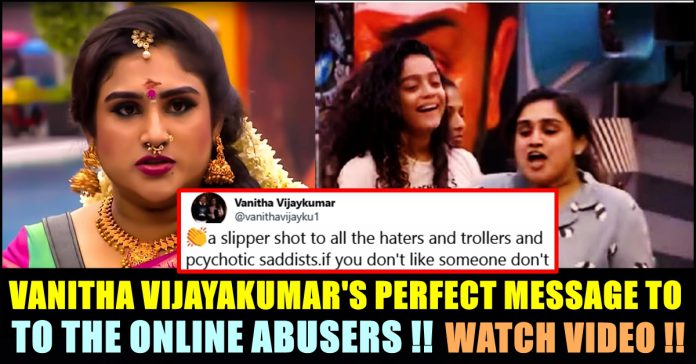 Online abuses became common and it is being faced by every celebrity across the world. A popular K-pop star who had long been the target of abusive online comments was found dead at her home Monday, South Korean police said.

Sulli, whose real name was Choi Jin-ri, was known for her outspokenness and drive for women’s rights, for which she had suffered online bullying and harassment. Her death created massive outrage across the world and Tamil Bigg Boss contestant Vanitha Vijayakumar also raised voice against online bullying through her official twitter account.

#StopCyberBullying
Tweeple family thambi’s thangachi’s we must be ashamed as #netizen
To be responsible for something like this.
This not #BiggBossTamil3 game show it’s real life
Cyberbullied 25-year-old K-Pop star Sulli found dead at home | World News https://t.co/1zI1j2JwrT

In a way of continuing her awareness against online harassment, Today, Vanitha shared another video of a singer making a song out the abusive comments she received. On sharing that video Vanitha wrote “Kudos
👏a slipper shot to all the haters and trollers and pcychotic saddists.if you don’t like someone don’t waste your precious time tweeting to them.get a life .a perfect example of how one must not give a damn to these useless people.#BeStrong #cyberbullying”

Kudos
👏a slipper shot to all the haters and trollers and pcychotic saddists.if you don’t like someone don’t waste your precious time tweeting to them.get a life .a perfect example of how one must not give a damn to these useless people.#BeStrong #cyberbullying https://t.co/xCTZZyDOz9

Being one of the most controversial contestant of the Bigg Boss show, Vanitha was eliminated from Bigg Boss house for two times due to receiving less number of votes from the viewers of the it. Arun Vijay Happily Posted A Family Picture Without Vanitha !! Here’s How She Reacted To It !!

Vanitha Vijayakumar who faced the wrath of public during her stint, got eliminated, made a comeback and won hearts of many viewers with her bold statements and with the way of approaching issues. She gained more support just few days before her eviction due to the freeze task in which she spent some lovable time with her adorable daughters. At the end of the show Vanitha received award from Kamal Haasan for being the most gutsiest contestant throughout the show.

What do you think on this take of Vanitha about online harassment ?? Comment your views below !!

Not many days ago, a drone video of a group of boys who were playing carrom board running away from the camera went extremely...