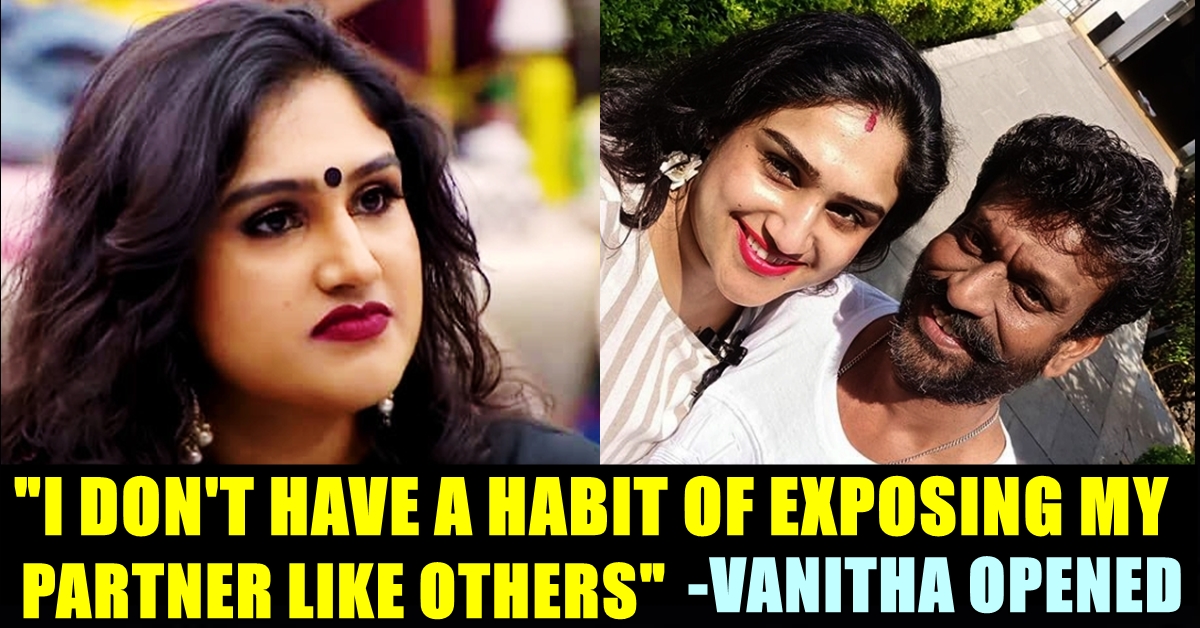 Vanitha Vijayakumar came up with a long Twitter post disclosing about her mind state after several media portals speculated that she chased her husband Peter Paul away based on a post uploaded by producer Ravinder Chandrasekhar. In a series of tweets, Vanitha said that she is going through a major challenge in her life and she is trying to sort it out.

Latest reports suggested that Peter Paul was sent out of house by Vanitha Vijayakumar for his excessive alcohol consumption. Vanitha Vijayakumar, reportedly beat him up to bring him under control but the aspiring filmmaker continued drinking while the family was returning to Chennai from Goa. Vanitha sent him out of her house due to his behaviour, suggested reports.

Now, Vanitha Vijayakumar, in her long statement, came up with a post saying that made a home with someone who didn’t have a home and family for many years. “He was in pain and so was I.. we loved laughed and lived thru the worst times beginning from covid pandemic to the media circus which was purposely created around us.” she wrote in her tweet.

“I believed nothing could break us..next came a health scare where I was terrified and shattered that I was going to lose him 2 times within a month..it was the worst pain and feeling.. I was so grateful to god to be able to bring him back home alive twice …especially this year” her next tweet said.

Further Vanitha said that Life changes when one’s loved one gets sick or going through recovery of something major in health. She said that it is her her job to take care of him. “even today I remain in the same pain..some sadistic people are still making money and fame out” her post read.

Vanitha also said that she has nothing to hide and added that taking advantage of this nature of her is not nice. She said that she is going through another major challenge in life and she is trying her best to sort it out. “it’s not something I’m able to change or ignore as its about life” her post read.

“I’m in immense pain and my heart is so heavy..I am so scared as love is the only thing I want and am scared to lose..I am being bold in facing this challenge without disturbing my work and my kids..my life has been a constant struggle and this isn’t something new to me” Vanitha wrote.

Vanitha said that she got used to lose in love and she became numb after getting disappointed in love she believed in. “losing a life in front of ur eyes is the most painful” her post read.

“I’m having to deal with that without having control..I cannot say I wish this hadn’t happened because life is a lesson and I’m still learning..I’m being strong and facing it with a pinch of salt..I kindly request you to not come to any theories by reading fake news. I don’t deserve to be abused or teased about as the truth is I never did anything wrong..I gave love to someone who needed it..I’m in a situation that all my dreams and hope for in my life might crash..I’m being positive but not convinced as its something which scares me..I’m strong and bold woman who has faced a lot in life…I’m hoping this too shall pass..please don’t speculate anything as it really hurts..love is the only thing that can crush me..I believe in miracles and hoping for one..whatever is destined I’m ready to face it as it is inevitable” the actress said in her post.

She also made sure that she doesn’t have anything to clarify more to anyone. “I don’t have a habit of exposing my partner and playing blame game so I can look good and gain sympathy..I’m grown up …I didn’t expect this but it happened and I will make the right decision keeping my kids and the people around me in mind..I hope and pray for the miracle but if not I’ll face It too..life still has to go on…nothing can break me anymore…lastly I’m not giving up yet” her post read.

Make the right decision keeping my kids and the people around me in mind..I hope and pray for the miracle but if not I’ll face It too..life still has to go on…nothing can break me anymore…lastly im not giving up yet

Former Selector Srikanth Slammed Dhoni For His Post Match Speech !!
Celebrities & Politicians Raised Voice Against The Culprit Who Made The Threat !!