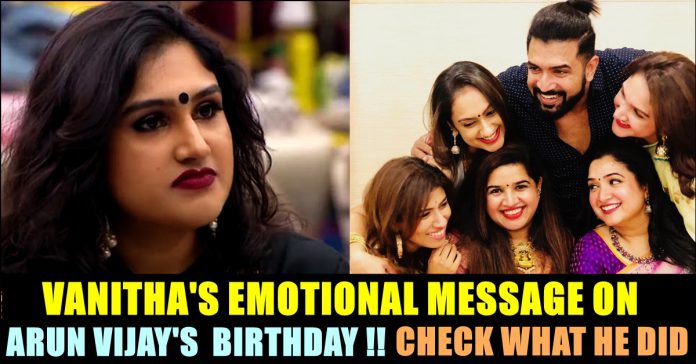 Vanitha Vijayakumar is a Tamil actress and producer who even attempted directing a movie once. Being a daughter of veteran actor Vijayakumar, Vanitha always received limelight. Recently her stint in Tamil Bigg Boss show, made the cameras of media to turn her side.

Being one of the most controversial contestant of the show, Vanitha was eliminated from Bigg Boss house for two times due to receiving less number of votes from the viewers of the it. Vanintha who faced the wrath of public during her stint, got eliminated, made a comeback and won hearts of many viewers with her bold statements and with the way of approaching issues. She gained more support just few days before her eviction due to the freeze task in which she spent some lovable time with her adorable daughters. She ended up receiving an award for guts and grits from Kamal Haasan in the show.

After coming out of the Bigg Boss house, Vanitha is pretty active in social media platforms, especially in Twitter. Though she came from the most influential family of Tamil cinema, the actress separated herself for some personal reasons. As we all know Vanitha’s brother Arun Vijay is one of the busiest actors of Kollywood as of now.

The actor celebrated his birthday yesterday and received wishes from all over the Kollywood industry. Vanitha Vijayakumar also wished her brother with an emotional message. “@arunvijayno1indifferences are something that can be sorted out. One life one family one blood .you and I maybe in our own journeys but we started together. we must make our family proud.We are so similar that made us different .#HBDArunVijay whether you like it or not I love u” she wrote from her twitter account.

@arunvijayno1 indifferences are something that can be sorted out. One life one family one blood .you and I maybe in our own journeys but we started together. we must make our family proud.We are so similar that made us different .#HBDArunVijay whether you like it or not I love u https://t.co/A1MzByUzEI

Unfortunately Arun Vijay who took time to respond to almost every wishes he received, didn’t respond to her tweet. The actor even replied to the tweet which was quoted by Vanitha Vijayakumar but didn’t reply for Vanitha.

Here’s some of his replies to those who wished him :

Thanks a lot brother..😊 https://t.co/Lhzx75LvCi

On seeing the unresponded post of Vanitha Vijayakumar, her followers in Twitter are consoling her and appreciating her for the courage and self confidence. As far as her upcoming projects are concerned, Vanitha said that she is going to be featured under her own production in near future. The film is titled as “Daddy” and is going to be directed by Vanitha herself.