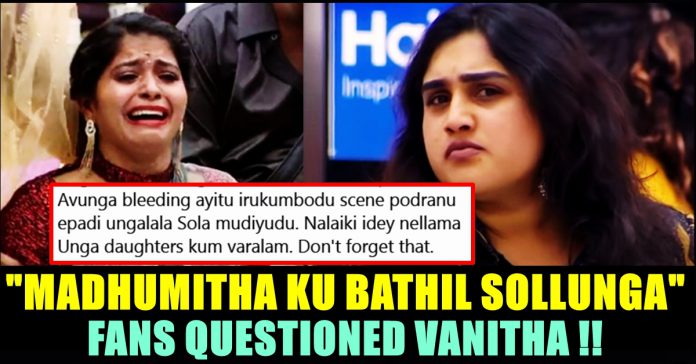 Vanitha Vijayakumar who faced the wrath of public during her stint, got eliminated, made a comeback and won hearts of many viewers with her bold statements and with the way of approaching issues. She gained more support just few days before her eviction due to the freeze task in which she spent some lovable time with her adorable daughters. Vanitha was overwhelmed when her two daughters entered the house and spent some valuable time with them. They shared their academic updates and about their extra curricular activities.

After getting evicted due to lack of votes, Vanitha appeared in social media for the first time after her eviction. Yesterday in her post, she wrote “Hi tweeple family! I have been literally #Biggboss lagged for the past few days and been trying to get to reality of my film work.i miss you guys too and definitely have a lot to share 😜 planning a live session soon . will keep you posted.bye till then.😍”

Hi tweeple family! I have been literally #Biggboss lagged for the past few days and been trying to get to reality of my film work.i miss you guys too and definitely have a lot to share 😜 planning a live session soon . will keep you posted.bye till then.😍

To this tweet, most of the followers asked her to give a statement regarding Madhumitha issue. Check out some of their reactions here :

Pls make a clear shoot to madhu… ur the correct person

everything is okay apart from madhu's matter.

Waiting for your clarification on madhu's allegations mam

I hope you’ll not try to justify your choices in #madhumitha’s incident but rather accept that even you could make a mistake. Realization is more powerful than anything. It’s never OK to gang up on someone & watch them bleed. Tamil ppl should never be put down by their own

Have grown to like you really, except for the behaviour with Madhumitha.. guess at least you shd’ve defended her.. anyways welcome back and rock on 🤘🏻

Question for you: how do you sleep at night knowing what you did to #Madhu?

2nd innings was partly good, but U took ur revenge on Madhu… first be human then u can talk about inspiration for women..a lady bleeding n u were mocking @ her saying,”scene poduraa”. Seriously??

What do you think on these reactions for Vanitha ?? Comment your views below !!

Shubman Gill, famous India cricketer who gained recognition through IPL tournament, has been grabbing headlines more regarding his personal life comparing to his cricketing...