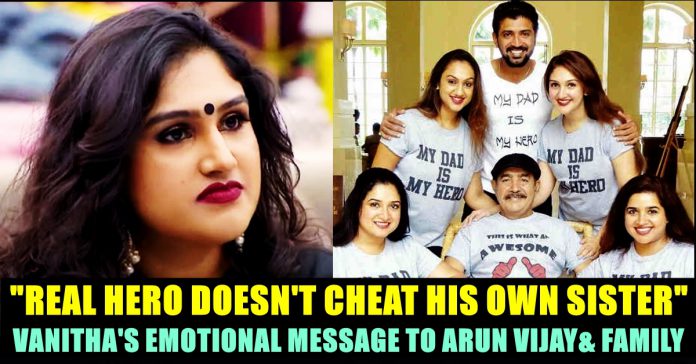 Actor Arun Vijay got a major breakthrough in Ajith Kumar’s “Ennai Arinthaal” in his film career which spans more than 24 long years. In the film he played the role of an Antagonist. The actor is now very much busy in signing movies as protagonist. His one of the upcoming film Mafia’s teaser is all set to release today around 6 PM.

“I said that I need the support of family members as we have a lot of years to go in this life.” says Vanitha who shed tears while talking about her father. “You are behaving heartless daddy. You are thinking that people are appreciating the pictures you post with other family members. But the people are cursing and questioning why you didn’t include me in those pictures. I know you read those comments too” says Vanitha in the video interview.

Followed by the interview where she expressed that she misses her family, Vanitha also posted a series of tweets by tagging Arun Vijay. She said that one can’t be a real hero when hurts his own sister. She also asked him not to hurt her and her kids.

@arunvijayno1
A real hero doesn't hurt and cheat his own sister.i have been constantly humiliated and ignored by u and my sisters.u are mature enough to sort this out.i deserve to be treated equally and not disrespected .stop hurting me and my kids.https://t.co/iHFLO5SjHA

Imagine I took away your son and your home and made the police harass u and your family and threw you on the streets taking away all your belongings and made u go through mental torture and made our father and other family against u for no fault of yours. You guys put me through

All this and much more.i have been pushed shoved and crushed but I have survived everything and made myself much more stronger, powerful and successful rather than killing myself and my kids.sorry guys I disappointed u . grow up and act responsibly and do the right thing.

In her earlier interviews Vanitha expressed similar opinions. Arun Vijay Happily Posted A Family Picture Without Vanitha !! Here’s How She Reacted To It !! Being one of the most controversial contestant, Vanitha was eliminated from Bigg Boss house for two times due to receiving less number of votes from the viewers of the it.

What do you think on these tweets of Vanitha to arun Vijay ?? Comment your views !!