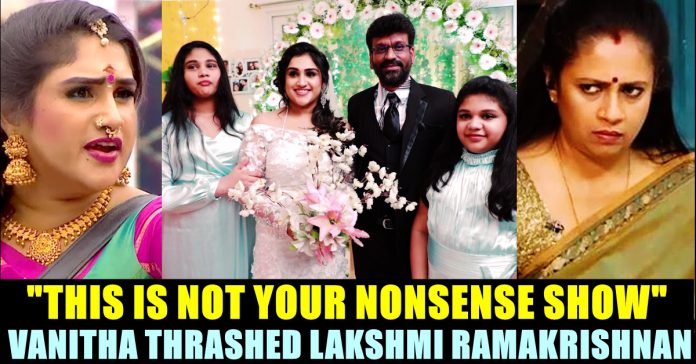 Vanitha Vijayakumar successfully got married to Peter Paul on 27th of June month and the pictures and videos of her marriage went viral across the social media platforms with various kind of reactions. The marriage took place in the house of Vanitha Vijayakumar in a traditional Christian ceremony. In the wedding ceremony, Vanitha looked stunning in a white colour gown and then groom looked dashing in a three piece suite. The couple celebrated the ceremony with champagne bottles and kissed each other as soon as announced as husband and wife. The marriage was conducted only with close group of friends due to the COVID 19 pandemic.

Vanitha said that she is nearing 40 years now and this lockdown helped her to get a clarity. In her note, Vanitha said that she got proposed by Peter Paul who helped her while starting her Youtube channel. “He stepped in as a friend and helped me when I was lost without any technical support for my Youtube channel during the lockdown” Vanitha wrote in her post while announcing about her marriage.

With his presence, Vanitha says that things worked out well with ease and stress free for her Youtube channel who goes on to add how he felt when he proposed her for marriage. “When he asked for my hand in marriage I was speechless. (Deep inside I was screaming yes though)” wrote an emotional Vanitha.

Vanitha who wanted her daughters’ approval, made Peter Paul to speak to her daughter it seems. “And when he spoke to him, they screamed Yes”Vanitha’s post read. Vanitha further said that tears welled her eyes when her daughters said that this was the best thing that has happened to her. “They wanted him in their lives as well” the actress wrote.

Check out some of the marriage pictures of her below :

As it is a third marriage for Vanitha Vijayakumar and second marriage for Peter paul, many people reacted in various ways for the marriage ceremony of the actress. Now, the Bigg Boss participant has reacted to a tweet of actress Lakshmi Ramakrishnan who is very much known for hosting a show named as “Solvadhellam Unmai”.

As soon as the marriage of Vanotha took place, Lakshmi ramakrishnan, in her official twitter account, posted a tweet saying that nothing is going to change unless woman understand the true meaning of empowerment. “Disgusting” read the hashtag of her post.

Unless women understand the true meaning of #Empowerment nothing is going to change! #Disgusting

On seeing this tweet from her, Vanitha Vijayakumar replied by saying that she doesn’t need Lakshmi Ramakrishnan’s support or approval regarding her decision as it is not her show.

@LakshmyRamki thank you for your concern …I am very well.educated and legally knowledgeable…I can handle my life as I always have fine.without anyones support…BTW I don't need u to.approve or support my decisions…kindly stay away its not a public issue..its not ur show

@LakshmyRamki remove ur tweet and for once mind ur own business..ur not in #biggboss show or ur nonsense family spoiling shows https://t.co/jiZkyG4uhA