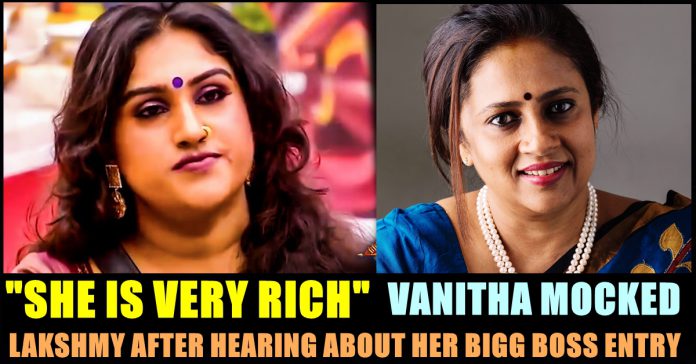 Vanitha Vijayakumar of Bigg Boss fame reacted to the buzz that was made on the Bigg Boss entry of Lakshmy Ramakrishnan with whom she had a verbal spat on air, a year ago. In a recent press meet she got participated to promote one of her upcoming films, Vanitha replied to the questioned to reporters who asked her to make a comment on it. The actress, sarcastically said that Lakshmy doesn’t have the compulsion to get into Bigg Boss house as already has so much money.

Vanitha Vijayakumar started her acting career in the year 1995 through a film named as “Chandralekha” in which she paired opposite to actor Vijay. Her personal life had always been under the scanner of media and public. After a number of failed relationships, the actress recently got married to a man named Peter Paul and broke her relationship with him due to his habit of excessive alcohol consumption.

“She is a rich person. She doesn’t need programs like Bigg Boss to earn” Vanitha said in her sarcastic manner. Watch the video below :

Season 5 of the most awaited reality game show Bigg Boss Tamil is all set to be inaugurated from the end of September month or the beginning of October. Glimpses of the promo shoot starring Kamal Haasan got circulated in social media platforms. The pictures that did rounds confirmed that Kamal who hosted past four seasons, is going to host season 5 as well. Now, it has been confirmed 100% as the first ever promo for the upcoming season got released by the man himself in his official twitter handle.

Here’s the inaugural promo of the cash rich show :

However, questions about the 15 plus celebrity contestants who are going to take part is being unanswered still and speculations about the same is being made across the Internet. Many media portals came up with a list of celebrities who could participate in the cash rich show. Lakshmy Ramakrishnan, Vijay Tv Soundarya, Suzane George, Masoom Shankar, Pradaini, Sunita, Singer Swagatha, Actress Vasunthara, Actress Aishwarya Baskar, Deepa Shankar are some of the names that are being circulated as the probable Bigg Boss contestants.