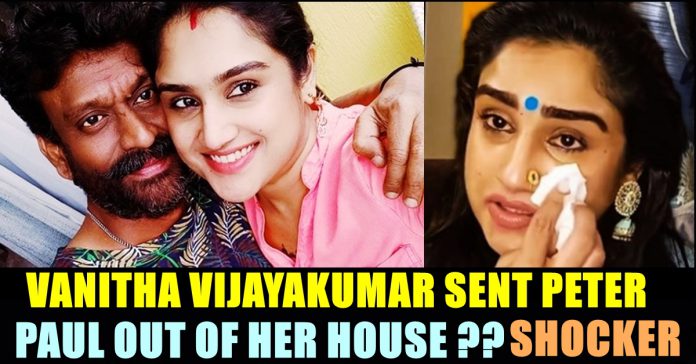 To my love ty for being who u r to me..u r my best friend and soul connection…love u to the moon and back

The marriage took place in the house of Vanitha Vijayakumar in a traditional Christian ceremony. The couple celebrated the ceremony with champagne bottles and kissed each other, pictures of which went viral in the social media platforms. The marriage was conducted only with close group of friends due to the COVID 19 pandemic.

Vanitha said that she is nearing 40 years now and this lockdown helped her to get a clarity. “He stepped in as a friend and helped me when I was lost without any technical support for my Youtube channel during the lockdown” Vanitha said about Peter Paul.

Followed by the marriage event, a huge controversy took place as Peter paul’s first wife approached media demanding her husband. It blew up when Producer Ravindran, Kasthuri and Lakshmi Ramakrishnan came in to the scene to help Elizabeth helen. Peter Paul was forced to appear for an interview with Vanitha Vijayakumar and they both justified their decisions in that interview which was streamed in the latter’s youtube channel. Vanitha even backed Peter Paul when producer Ravinder tried revealing his extra marital affairs.

Despite of the social media outrage, the couple stood strong and were leading a successful life. Even the actress took care of Peter when he had a sudden chest pain. He was admitted in Porur Ramachandra hospital and recovered within a day. Both of them were happily making contents for their youtube channel and even made a trip to Goa.

Watch the latest video of the duo below :

Now, latest reports suggested that Peter Paul was sent out of house by Vanitha Vijayakumar for his excessive alcohol consumption. According to Indiaglitz, Peter Paul who as accused by his wife Elizabeth Helen as an alcoholic addict, consumed alcohol and misbehaved. Vanitha Vijayakumar, reportedly beat him up to bring him under control but the aspiring filmmaker continued drinking while the family was returning to Chennai from Goa. Vanitha sent him out of her house due to his behaviour, suggested reports.

Arun Vijay Finally Opened On The Rift Between Himself & Sivakarthikeyan !!

During a press meet ahead of the release of his upcoming film "Yaanai", actor Arun Vijay replied to a question of a reporter about...