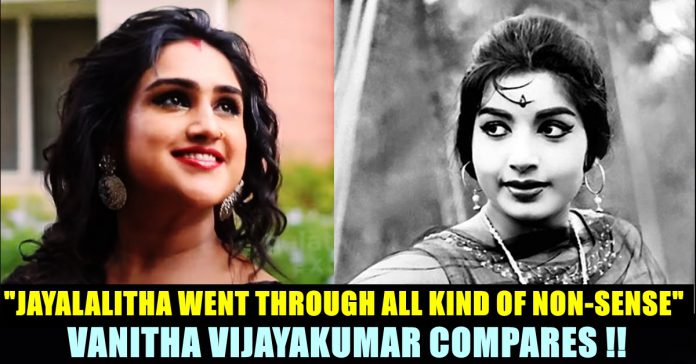 Vanitha Vijayakumar Says That She Sees Peter Paul As Her Child !! WATCH

Producer Ravindran and actress Kasthuri released a video supporting Lakshmy Ramakrishnan who got involved in an argument with Vanitha Vijayakumar during the night of 19th July. Meanwhile, another couple interview of Vanitha Vijayakumar and Peter Paul surfaced in youtube. An earlier couple interview Vanitha and Peter Paul participated created huge controversy among the Tamil social media platforms. Especially after Elizabeth, wife of Peter paul complained about it to Lakshmy ramakrishnan who is known for her “Solvathellam Unmai” show.

Now, In this new video, Vanitha said that she met Peter Paul for the first time to hear a script which he is going to direct. Peter Paul was planning to feature Vanitha in a negative character. She who went with her daughters at that time, asked Peter Paul to feature her in another character which impressed the aspiring filmmaker. He said that he got admired by Vanitha’s brilliance and proposed her to marry him. Vanitha said that her relationship with Peter Paul is similar to a Mother and adopted child relationship.

“I don’t know how you people would receive it but I am comparing it to a mother and child relationship. I believe that husband and child relationships are similar when it comes to love. Even if it is someone else’s child, the mother would treat that child as her own child when she adopts it. Be it 10 days or 10 months, the mother would raise the child with all her love. Suddenly , the biological mother shows up and says that she wants her child back. This is how I see this situation” says Vanitha Vijayakumar in the recent interview. She firmly said that she won’t give Peter Paul back to Elizabeth helen and added that her love and affection are beyond man made law and orders.

Peter paul says that the life he is currently living with Vanitha Vijayakumar is what he longed for. Regarding the online trolls, the actress said that people who type in computer would understand her if they experienced the struggles in real life. The former Bigg Boss contestant said that she won’t compare her life with a normal woman as she saw many ups and downs in her life.

The actress further asked people to compare her with women who went through difficulties in their life. “I am definitely not that one normal woman who go through a very normal life. There are many women out there like me. Compare me with them. There are many women like me who succeeded in life. Even in politics, Indira Gandhi and Jayalalitha went through all kinds of nonsense to get there. So don’t compare my life with a normal house wife’s as the path I came through is completely different” said Vanitha who added that she has a plan and is currently travelling according to her plan.

Vanitha asked people who are questioning her based on her behaviour in Bigg Boss show whether Cheran is still treating Losliya as his daughter. “Basically, it was a game show. I am not saying we all acted but we were playing game. I don’t know why people are not understanding it yet” she said.

As the Lockdown 2.0 is progressing, people of country India are looking for ways to kill their loneliness. Cinema and sports personalities are appearing...

Viewers of Bigg Boss show discovered that the contestants of the show spending lakhs of money to promote themselves through PR. A contestant named...