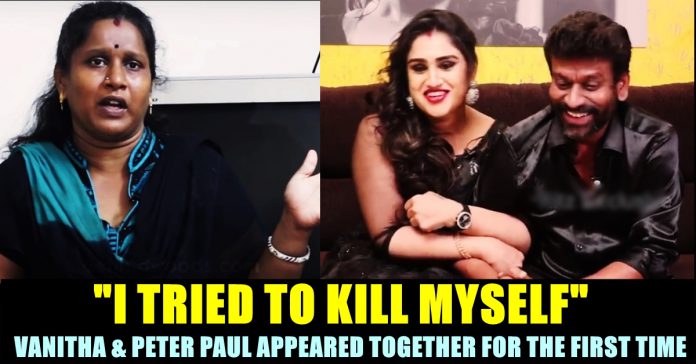 Vanitha Vijayakumar and Peter Paul appeared for the first time in an interview together. In the interview, both them narrated how they met and how it all happened since their first meet. Vanitha said that she met Peter Paul for the first time to hear a script which he is going to direct. Peter Paul was planning to feature Vanitha in a negative character. She who went with her daughters at that time, asked Peter Paul to feature her in another character which impressed aspiring filmmaker. The actress justifies her relationship with Peter Paul by comparing it to Mother and child relationship.

Vanitha Vijayakumar and Peter Paul grabbed headlines once they conducted a marriage like ceremony with their close relatives. Peter paul’s wife Elizabeth Helen, after complaining to Police, approached media and alleged that their marriage is illegal. She said that she wants her husband back for the sake of her children. Producer Ravinder intervened to raise voice for Elizabeth and the issue got elevated once a woman named as Surya Devi started posting videos against Vanitha Vijayakumar by accusing her for ruining Tamil culture.

Vanitha Vijayakumar appeared in commissioner officer recently and made a legal complaint against Ravichander and Suriya Devi. She met the press and accused Surya Devi of smuggling “Ganja” and demanded Producers council to expel film producer Ravinder. Reacting to the press meet, Elizabeth released a video asking where Peter Paul is. She asked why he is hiding behind Vanitha Vijayakumar and abused him.

Now, Vanitha and Peter Paul appeared together in front of media for the first time narrating how they fell in love with each other. Peter Paul accused his wife for taking him away from his own family and said that the entire family of Elizabeth Helen tried to dominate him. He said that he never consumed alcohol till 2005.

“If I go to my house, I must have someone to talk to as I am a creator. I am not going to my home just to eat and sleep. Is that a home or lodge ?? I never talked to her that way at all” Peter paul says. He further says that his wife started doubting him at one point due to the calls he is getting. “Once I broke my iPhone in a public road.” he says in the interview. Peter paul also said that his wife demanded money from him when he faced a biggest financial crisis due to the failure of a studio he was running. “At that time, I was totally depressed and started consuming alcohol” he said. “But I never got addicted and the rehab things they said are total rubbish” he added. He says that he tried to commit suicide due to depression and it caused the bruises in his body.

“I had 45 injuries in my body at that time that I can’t eat and sleep. She never visited me even at that time. She said that she didn’t want me and went away.” Peter paul said. He also denied to reveal about a private issue that took place between himself and Elizabeth. “There is a girl child in that house. I feel ashamed of talking about that.” he said in the interview.

Previous articleGayathri Raguramm Slammed Kamal Haasan For His Tweet On “Karuppar Koottam” !!
Next articleSushant’s Spirit Communicated With This Paranormal Expert ??