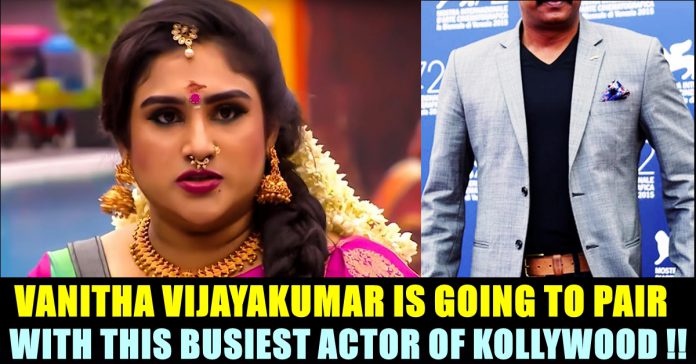 Most recently, she reviewed the fourth season of Bigg Boss show and appeared as a guest in “Cooku with Comali” show. The actress who caught into a number of controversies after participating in the Kamal Haasan hosting show, is also busy making contents for her youtube channel through which she is providing cooking tips to her 6 lakh plus followers. Now, she has announced about one of her upcoming projects and expressed her happiness on pairing up with one of the busiest actors of Kollywood.

The Bigg Boss star is going to act along with multifaceted Samuthrakani in the remake of Bollywood blockbuster “Andhadhun” in which Prashanth, Priya Anand and Simran are playing the lead roles. The film which was directed by Sriram Ragahvan in Hindi, is going to be directed by ace filmmaker Thyagarajan. Prashanth is going to replace Ayushman Khuranna whereas Priya Anand replacing Radhika Apte.

Sharing the video, Vanitha Vijaya kumar confirmed that she is going to pair opposite to Samuthrakani in the film who plays the role of a police officer. The actress, in her official twitter account wrote “Joint the sets of #Andhagan today.. privileged to be pairing with Samuthtrakani”

As we all know Samuthrakani is known for his versatile acting. He played Dhanush’s father in “Vela Illa Pattadhari”, Police officer in “Visaranai”, Teacher in “Sattai”, Villain in “Vada Chennai” etc. He has also directed notable movies and is considered as one of the busiest actors in Kollywood.

Through her Bigg Boss stint, Vanitha gained a separate fan following for the way she handled the issues that took place in the Bigg Boss house between the other participants. She received an award for her “Guts and Grit” by Kamal Haasan. She is the only contestant in Tamil Bigg Boss history who got eliminated and made a come back within days as a participant.

Only those living under a rock must have missed the crazy viral photo of Sunny Leone and Mammootty from the sets of Madura Raja. Posted...

Director of one of the most controversial movie of the year "Draupathy" movie's director is all set to work on his next film. Made...

Karthik Subbaraj has kept his word and delivered what he promised - a satisfying Rajinikanth movie. Though Kaala and Kabali worked well at the...