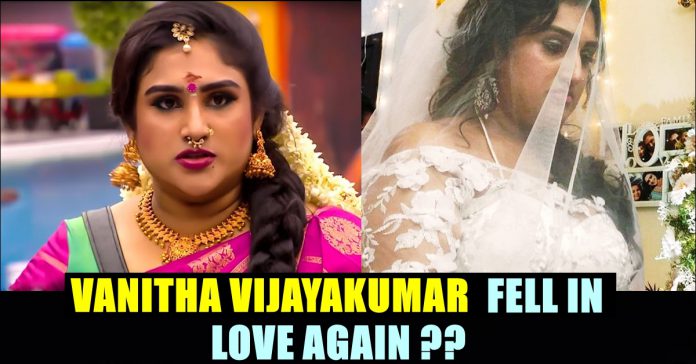 After all the furore that took place in the social media regarding her relationship with Peterl Paul, actress Vanitha Vijayakumar came up with a social media post saying “In love again” and tagged actress Uma Riyazkhan who is known for acting in films such as “Mowna Guru”, “Anbe Sivam” etc. As soon as her post surfaced in her official Instagram handle, media portals and fans started speculating that Vanitha Vijayakumar, after separating herself from Peter paul, fell in love again. However, it seems to be a dare or challenge from Uma Riyazkhan to the “Chandralekha” actress.

Vanitha Vijayakumar married Peter Paul during june month. After their marriage, a woman named as Elizabeth Helen raised complaint against Vanitha and claimed Paul as her husband. She faced severe criticism from fans and from a number of celebrities for her decision of marrying Peter Paul. Vanitha, however, ignored her and managed to live with Peter Paul in her house. After a number of months, due to the excessive amount of alcohol consumption, Vanitha got separated with Peter Paul.

A couple of days back, a court order has been issued to Vanitha Vijayakumar and Peter paul to appear on person on December 23rd in connection with a case filed by Elizabeth Helen, the latter’s wife. Now, amidst such situation, Vanitha Vijayakumar came up with a social media post writing “In love again” by tagging actress Uma Riyaz Khan. She asked Uma “Are you happy now ? through the post in a way of indicating that it is just a friendly banter.

The post garnered 5000 plus likes so far but fans couldn’t express their views on it as Vanitha turned off the comment section.

Vanitha Vijayakumar is currently involved in reviewing the ongoing Bigg Boss season for a private youtube channel. She is also participating in the shows being conducted by Vijay Television. Vanitha started her second innings in the media industry through Bigg Boss show in Vijay Tv hosted by Ulaga nayagan Kamal Haasan and went on to clinch the title in “Cooku With Comali”, a cookery show which had celebrities of Vijay Television as participants.

The actress is also busy making contents for her youtube channel “Vanitha Vijayakumar” through which she is keeping her 6 lakh plus subscribers engaged through her cooking related videos.