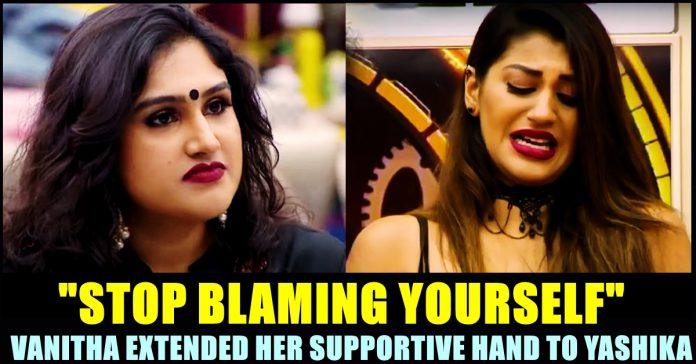 Vanitha Vijayakumar of “Bigg Boss” and “Cooku with Comali” fame supported Yashika by dropping a comment on one of her recent Instagram posts through which the young actress talked about the ordeal she is going through after a road accident. Vanitha said to Yashika that this cou;d have happened to anyone and that’s why it is called an “accident”. The title winner of “Cooku with Comali” season 1 said that birth and death are predestined and added that no one can change it.

Vanitha wanted Yashika to stop blaming herself for something that happened beyond her control and said that the latter is a victim too. She advised Yashika not to care about what everyone thinks and suggested her to keep her conscience clear. She further asked Yashika to take rest and blessed her through the comment.

Ever since the news on Yashika’s accident at East Coast Road, Chennai took place, a set of people has been saying that the actress must have consumed alcohol while drive and caused the accident which killed her best friend Pavani. However, reports from Doctors and Police confirmed that the actress wasn’t inebriated while driving the vehicle. Still, a number of social media users are verbally attacking the actress, saying that she must have committed the accident due to excessive alcohol consumption.

On Tuesday, Yashika came up with a social media post slamming people who accused her of “drunk and driving”. The actress, in her post, said that she would have been in jail if she was intoxicated at the time of the accident and not in hospital. Yashika expressed her dejection over people spreading fake rumours for so long and asked them to have some humanity and grief towards her friend who lost her life.

Yashika also said that the Doctor report says the same and slammed media channels which are spreading baseless rumours for viewers and subscriptions. She mentioned that she had filed a defamation case two years ago and vented out saying that those people could go any extent for the sake of gossip.

Actress, Television star and Youtuber Vanitha Vijayakumar came across the post of Yashika and dropped a comment encouraging Yashika’s mental health. “darling this could have happened to anyone..that’s why it’s called an accident…birth and death are predestined..no one can change it..you were a victim too.. stop blaming yourself for something that was beyond your control…” she said in her comment.

“you don’t have to care what anyone thinks ..keep your conscience clear…rest and take care of yourself.. you survived this horrible incident for a reason… god bless you darling” she added.

In her next post, Yashika updated about her health and explained how she is mentally affected. “Mentally and physically I’m injured. God has punished me. But this is nothing compared to
what I’ve lost” the actress said after updating about her health.

Aishwarya, Sanam shetty, Samyuktha, Divya Sathyaraj and many others extended their support to the young actress by reacting to the post.

Pan Indian actor Madhavan who is known among Tamil cinema audience for his appearance in films like "Alaipaayuthe", "Vikram Vedha", "Irudhi Suttru", replied...

Replying to a tweet of Director Shekhar Gupta who said that A.R Rahman's Oscar awards proves that he has more talent than the Bollywood...