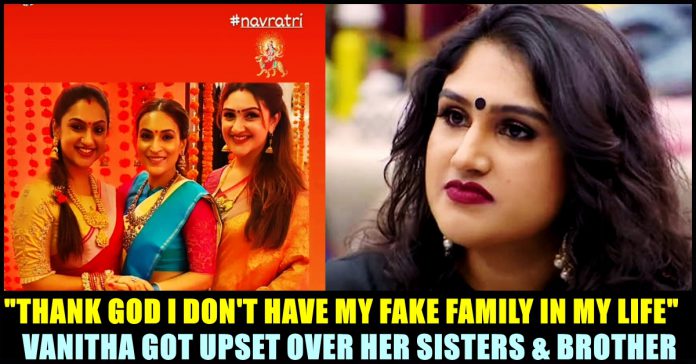 Former Bigg Boss contestant and actress Vanitha Vijayakumar came up with a post in her official Instagram handle, expressing her emotions over the demise of her 20 year old niece Anitha who left the world due to cardiac arrest. After saying that she got shattered and heart broken, Vanitha expressed her displeasure over her other family members dressing up and participating in functions few days after the demise of the young girl. Vanitha also shared that she is not celebrating “Navratri” due to Anitha’s death. The post surfaced in Vanitha’s Instagram space, hours after Sridevi Vijayakumar uploaded a series of stories in her photo/video posting social media handle celebrating Navratri with Aishwarya Dhanush.

Anitha died of cardiac surgery after going through a surgery in New Delhi, according to the post of Vanitha Vijayakumar who says that Anitha is the daughter of her Akka (sister) Indra who born to actor Vijayakumar’s own brother. The actress said that Anitha is a God daughter to her and added “anitha was the most kindest, understanding, affectionate generous child… she has been there for me always.. she promised to take care of me and be the god mother for my kids” in her post.

Vanitha said that she knew about the demise of Anitha only after 16 long days as she was in Dubai. Through her post, Vanitha says that Anitha was supposed to stay with her for two months from mid of October. Not knowing about her demise, Vanitha messaged Anitha to question about her arrival on 8th of October only to know that she was burnt to ashes on 4th of the same month.

Further, Vanitha who said that she cancelled the Navratri celebrations as she is mourning, went on to express her angst over her other family members acting casually, despite the death of Anitha. “Navratri cancelled for me this year as I’m mourning… unlike my sisters my brother and immediate family I am not celebrating and dressing up for others birthday parties or golu celebrations when we lost a girl child in our immediate family few days before” Vanitha said through her post and added “i can’t believe that people can ignore the tragedy and pain our own sisters family is going thru and flaunt their sarees jewelry and fake friendships as they always do…obnoxious and inhumane behaviour…”

The actress also thanked god for not having her “fake” family in her life. “I sincerely Thank god I don’t have my fake family in my life …good riddens to bad rubbish… Anitha was one of us and our lakshmi…” Vanitha’s post read. She consoled Anitha’s mother and regretted for not meeting her after all the planning.