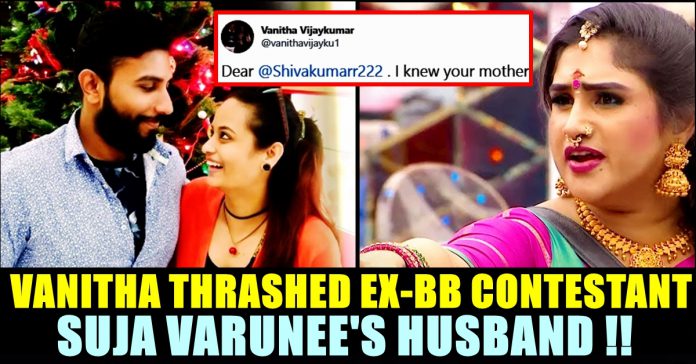 After coming out of the Bigg Boss house, Vanitha is pretty active in social media platforms, especially in Twitter. Recently, the former actress has posted a tweet about Shivakumar who has acted in films like Singakutty and Idhuvum Kadanthu Pogum etc. Shivakumar who is watching the Bigg Boss show in regular manner, has been posting his views about it in Twitter almost daily.

Vanitha who saw his tweets about her after coming out of house said “Dear
@Shivakumarr222. I knew your mother very well and of course your dad is my family. Im sure your late mother wouldn’t be proud of certain comments you have posted on me in #BiggBoss you now have a child too.try to be more responsible in commenting about another mother.”

Dear @Shivakumarr222 . I knew your mother very well and of course your dad is my family. Im sure your late mother wouldn't be proud of certain comments you have posted on me in #BiggBoss you now have a child too.try to be more responsible in commenting about another mother.

It is notable that Shivakumar is one of a son of Ramkumar Ganesan which makes him a grandson of Legendary actor Shivaji Ganesan. He got married to former Bigg Boss contestant Suja Varunee who participated in the first season of Tamil Bigg Boss. The couple gave birth to a male child recently.

On seeing the tweet of Vanitha, Shivakumar replied to her by saying that he just analyzed his view of the one hour show. He said that he didn’t saw the program as a 24 hours show. He also asked her to read all of his tweets in which he praised her as well. Check out his reply here :

(PART1) Thank you so much Akka..I just analyzed my view of the one hour program! Not as a 24hr program! I know you knew my mother very well and you were also close to her.. It's a great honour that you remember me..Some views of mine might vary, but it was my view.. 🙏💞 https://t.co/heAwGlgdFj

(P2)Please read all my tweets if u have time or I shall screenshot u & send it.Even my last tweet about u was a big love to u as a mother & supportive towards u. Im still kalachifying for what that "Angel" Robert still doing😂 garnering publicity thru u, but not me 💞 Lots of 💗

Check out some of the screenshots of his tweets about Vanitha :