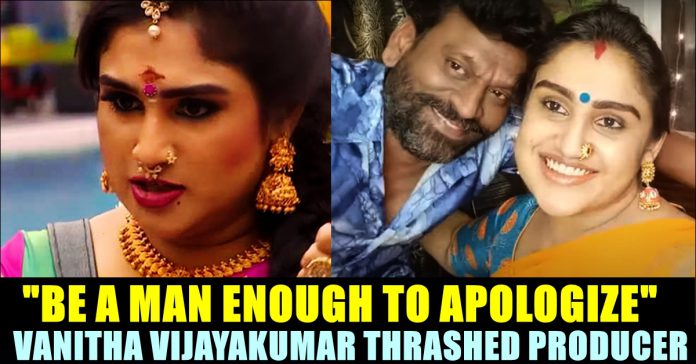 Along with public, several celebrities including Lakshmi Ramakrishnan, Kutty Padmini reacted to the marriage issue of actress and former Bigg Boss contestant Vanitha Vijayakumar. However, they deleted their comments after Vanitha replied to them in a furious way. Now, movie producer Ravindran Chandrasekar has expressed his disagreement over the marriage of Vanitha Vijayakumar and said that she broke the law by marrying Peter Paul who is still a husband of Elizabeth Helen, his first wife.

Ravindran called Vanitha’s decision of marrying Peter paul as “stupidity”. He said people were happy for Vanitha till knowing about the issue being faced by Elizabeth. Vanitha, in one of her video, said that what took place between herself and Petel Paul was not marriage at all. “Only after sorting out the legal issues, we will get married. This is more like an engagement” the actress said. Reacting to it, Ravindran said that Vanitha herself termed that event as “Marriage” and now she is changing her stand after a problem aroused. He further said that Vanitha couldn’t engage with a man who is a husband of someone else.

Ravindran also addressed an issue that took place inside Bigg Boss house. “I am a big fan of Vanitha Vijayakumar since Bigg Boss. The way she made a come back surprised me and she slammed Sherin by calling her relationship with Tharshan as “Affair”. Now, the same thing is happening in her own life. “That day, as a fan I got impressed with her outspoken attitude but now I got disappointed as she is involved in a similar relationship” Ravindran said. He even pointed out how Vanitha is shutting those who are trying to confront her and said people won’t accept everything she do.

Watch the video of his interview here :

Helen said that she got separated from her husband for only 4 years, not 7 years and stated that it is just a small misunderstanding between husband and wife. When Helen approached All women’s police station in Vadapalani after hearing about the marriage news about her husband and Vanitha, Peter Paul reportedly said to Police that he won’t marry Vanitha before divorcing Elizabeth Helen legally. Helen said that she wants her husband back at any cost.

Now, reacting to his allegations, Vanitha Vijayakumar personally sent him a voice note and said that she wants to talk to him. “If you call me immediately. It will be good for you or else you will have to face legal suit” Vanitha said to Ravindran. However, the film producer refused to talk with Vanitha saying that it is Sunday and he is having a time with his family. He asked Vanitha to go ahead with her legal action against him and said that he know how to handle it. Ravindran said it through a text message and added that he will talk to her the next day.

Replying to his text message, Vanitha Vijayakumar asked him to apologize for the way he talked about her. “I have seen all that you said in the interview. Will you be Okay if I criticize your wife and your daughter ? Be a man enough to apologize. Make movies and gain a name out of it. I know about you only through your youtube videos where you talked about Kavin” she slammed. Ravindran sent a long message to Vanitha, replying to her voice note.

All #Kavin fans this man is going overboard in others business…he deserves to be slammed …media has to stop asking useless random people about others personal lifehttps://t.co/BaAHtpCKdV

The impact made by Bigg Boss show is huge as fans of the show are still talking about the reality game show in social...