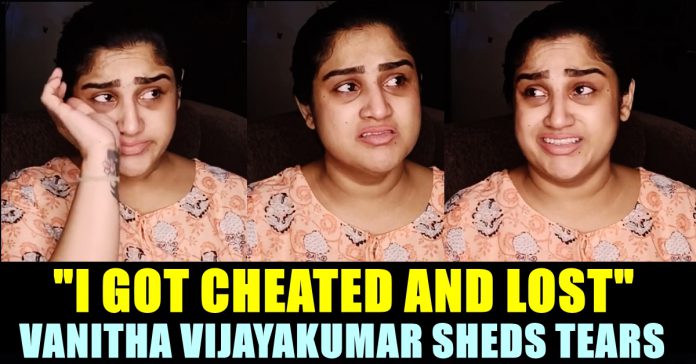 In a 50 minute long emotional video, Vanitha Vijayakumar admitted that she broke up with Peter Paul and made his habit of alcohol addiction public. The former Bigg Boss star said that she has no objection in Elizabeth Helen, Peter Paul’s first wife, leading a marriage life with him from now on. The actress who seemed literally fed up with the bad habits of Peter Paul, shed tears on air while admitting that she lost in love one more time.

Earlier, Vanitha Vijayakumar came up with a long Twitter post disclosing about her mind state after several media portals speculated that she chased her husband Peter Paul away based on a post uploaded by producer Ravinder Chandrasekhar. In a series of tweets, Vanitha said that she is going through a major challenge in her life and she is trying to sort it out.

Latest reports suggested that Peter Paul was sent out of house by Vanitha Vijayakumar for his excessive alcohol consumption. Vanitha Vijayakumar, reportedly beat him up to bring him under control but the aspiring filmmaker continued drinking while the family was returning to Chennai from Goa. Vanitha sent him out of her house due to his behaviour, suggested reports.

Now, partly denying the news, Vanitha Vijayakumar confirmed that Peter got addicted to alcohol and was not living with her now. She said that he has been absconding from her for the past three days and is consuming alcohol continuously. Recently, when Peter Paul had an heart attack, Vanitha Vijayakumar admitted him in a private hospital and took care of him. She managed all the medical expenses to save him from death and brought him back to home. After that, due to regular smoking habit, his health got worsened and got admitted to hospital again, says Vanitha Vijayakumar.

Doctors advised him to forget cigarette and Vanitha requested him the same. Vanitha planned for a trip to Goa to reduce the mental pressure the family is going through due to the media ruckus and reached there couple of weeks ago. At that time, Peter Paul consumed alcohol after hearing about his half brother’s health illness. “When we were leaving Goa, I felt the heavy smell of alcohol and realized that he was drunk. I drove the car for 14 hours straight while he was sleeping in a drunken state. After reaching Chennai, he escaped when we were leaving from car to the apartment.” she said.

“From that on, for 1 week long, he has been drinking and smoking. He asked money to many people to buy alcohol but no one encouraged it. I found him in a drunken state with the help of my costumier. At that time, his brother who was ill, died. I advised him to avoid drinking alcohol as he has two families with four children. As his brother was died, he said that he wants to attend the funeral. I gave him some money and sent him. But he didn’t go to the funeral. He used the money to consume alcohol and attended the funeral in an alcoholic state the next day.” said Vanitha.

“His phone is switched off till now. Few people are informing me that he is visiting places in a drunken state. My heart broke into pieces when I realized that the alcohol addiction is important for him more than me.” she added.

The actress also expressed her disappointment over Elizabeth Helen who denied to visit him in the hospital when he was ill. She also said that Peter Paul went into depression due to the media tension created by Elizabeth helen. “I believe that I entered in his life for a reason. I saved his life. Without me he wouldn’t have survived that heart attack. I entered in his life in halfway, now leaving it in halfway” said Vanitha who added that she has no objection in Elizabeth living with Peter paul from now on.

Previous articleS.A Chandrasekar Got Extremely Angry On Seeing This News About Him !!
Next articleCompilation Of Dinesh Karthik’s Tamil Instructions To Varun Chakravarty !! WATCH