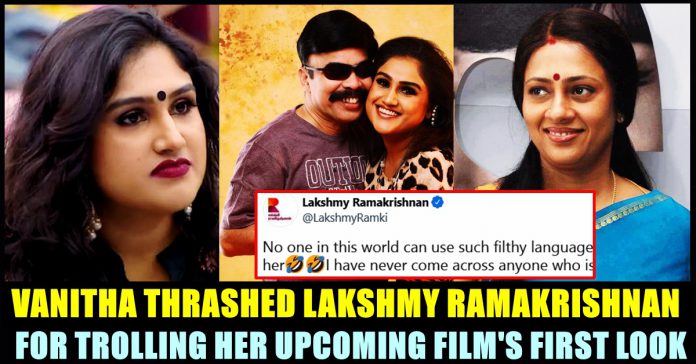 Vanitha Vijayakumar reacted to a news which said that Lakshmy Ramakrishnan laughed at her first look poster of one of her upcoming movies. The actress thanked the “Solvathellam Unmai” host sarcastically, saying that she is admiring her secretly and for being an ardent fan of her. She also tagged her co-star power star Srinivasan and said that they won already as the film is being made to make people laugh. Power star replied to Vanitha with a saying of Hitler and encouraged her.

Most recently, Vanitha Vijayakumar came up with a post in her official twitter and Instagram handle which showed herself and Power star Sreenivasan donning bride and groom attire respectively. Power star could be seen holding the garland of Vanitha and the post suggested that they are getting married. Tagging Power star, Vanitha added heart emojis as her caption for the post. After the wide reach the post garnered, the actress, on Friday, made it public that it is about one of her upcoming films named “Pick up Drop”

Vanitha Vijayakumar started her acting career in the year 1995 through a film named as “Chandralekha” in which she paired opposite to actor Vijay. Her personal life had always been under the scanner of media and public. After a number of failed relationships, the actress recently got married to a man named Peter Paul and broke her relationship with him due to his habit of excessive alcohol consumption.

Lakshmy also commented on the controversial episode of “BB Jodigal” in which Vanitha involved in an argument with vetaran actress Ramya Krishnan.

No one in this world can use such filthy language except her🤣🤣I have never come across anyone who is so indecent and filthy . Never !!!

Others can never do what she did!!! She is indeed a specimen for…….. fill in the blanks🤣

Reacting to a news which said Lakshmy laughed at the first look of “Pick up Drop”, Vanitha said “I thank that obnoxious poisonous lady #lakshmiramakrishna for being my secret admirer and ardent fan.. following me meticulously, exactly what we need . a comedy script is made for everyone to have a good laugh.. guess we won already” and tagged Power star in her tweet.

I thank that obnoxious poisonous lady #lakshmiramakrishna for being my secret admirer and ardent fan.. following me meticulously, exactly what we need . a comedy script is made for everyone to have a good laugh..guess @powerstarhere we won already https://t.co/y7WXAWojJL

Power star quoted a saying of Hitler on people getting criticized from behind and Vanitha endorsed the tweet by sharing it.

Previous articleCheck How This Hero Who Missed To Play Lead In “Sarpatta Parambarai” Reacted After Watching The Movie !!
Next articleVideo Of Seeman Saying That He Would Complete 1000 Bicep Curls Goes Viral !! WATCH

Actress Kaajal Pasupathi who is known for appearing in Tamil films as a supporting artist, is pretty much active in social media platforms especially...