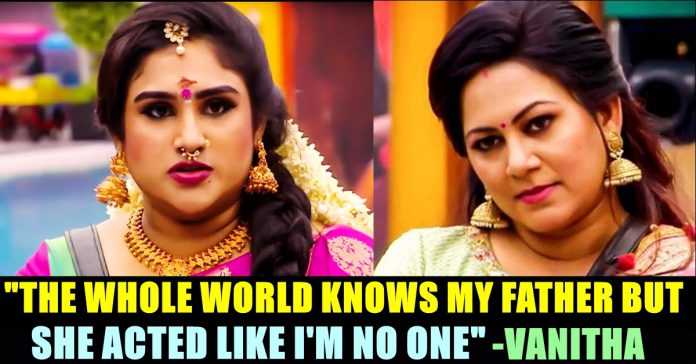 Vanitha Vijayakumar who is currently reviewing the ongoing Bigg Boss season, slammed Archana for not considering to say a “Hi” in public functions. The “Chandralekha” actress felt that she could have wished her for the sake of the fame her father and mother gained. The former Bigg Boss contestant said that Archana is very much arrogant and her charcater is very different.

Currently, she is involved in analyzing the fourth season of the Bigg Boss show. The actress who caught into a number of controversies after participating in the show, is now busy making contents for her youtube channel through which she is providing cooking tips to her 6 lakh plus followers. She is also collaborating with a private youtube channel named as “Galatta” and reviewing the ongoing Bigg Boss show.

Recently, while talking about the show, Vanitha shared about what she knows about Nisha who recently got evicted from the show. She said that Nisha is not a cunning person and added that she got trapped by Archana. “Nisha is a good woman who asked me to be strong during my tough times. She asked me to do what makes me happy. She is not a bad or conniving person who plays games with human emotions. The only problem she has is that she would believe people easily. After coming out of Bigg Boss house, she would learn a big lesson” Vanitha said. “Archana is a good game player who is making good use of Nisha” she added.

Further Vanitha remembered how arrogant Archana was and shared about it to the audience. “I have seen Archana two three times in public places. She must have known about me and everyone knows about me. She is extremely arrogant. She will not even consider looking at me or knowing about me. I don’t know what that stops her. We are in the same industry, I am a daughter of Vijayakumar and Manjula. You don’t have to respect me but my parents are legendary.” Vanitha said in the interaction.

“My mother is a Superstar. She acted with almost all the Superstars including M.G.R, Sivaji, NTR, Rajkumar, Amitabh Bachchan and many others. She was celebrated by South Indian film industry like how Nayanthara is being celebrated as “Lady Superstar” today. And I don’t have to say about my father. The whole world knows about him”

“She don’t have to say “Hi” but an artificial smile could have helped. She behaved like I’m no one and she appeared from a different planet as an alien. I have nothing against Archana but her character is different from what I witnessed” said Vanitha and added that Nisha was being used by Archana.

In the recently held "Tamil Directors Round table discussion", renowned filmmaker Gautham Vasudev Menon opened on how he received the troll against him that...

Asuran VS Narappa Escalated Into Kollywood VS Tollywood !!

Day after fans of Tamil actor Dhanush and Telugu actor Venkatesh involved in verbal spat in Twitter over who did the best for the...