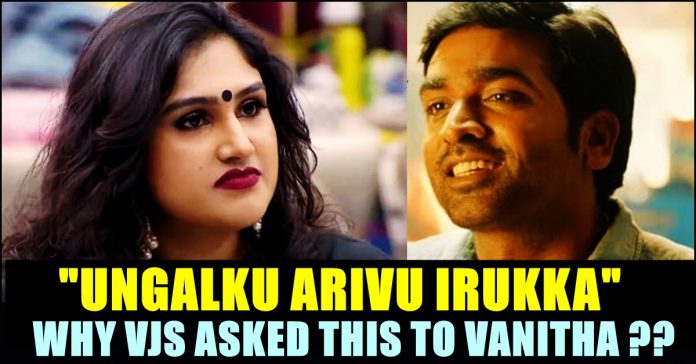 In one of a recent interaction with a youtube channel, Vanitha Vijayakumar has revealed her first encounter with actor Vijay Sethupathi. She said that she was taken aback by the gesture of Vijay Sethupathi when he talked to her for the first time with the actress in a phone call. As we all know, Vijay is one of busiest actor of Kollywood right now and is very much known for his versatility.

Vanitha Vijayakumar is a Tamil actress and producer who even attempted directing a movie once. Being a daughter of veteran actor Vijayakumar, Vanitha always received limelight. Recently her stint in Tamil Bigg Boss show, made the cameras of media to turn her side.

Being one of the most controversial contestant of the show, Vanitha was eliminated from Bigg Boss house for two times due to receiving less number of votes from the viewers of the it. Vanintha who faced the wrath of public during her stint, got eliminated, made a comeback and won hearts of many viewers with her bold statements and with the way of approaching issues.

After coming out of the Bigg Boss house, Vanitha is pretty active in social media platforms, especially in giving interviews to youtube channel. In her recent interaction with Talks Of Cinema, Vanitha revealed about her personal experiences with some of the toppest heroes of Tamil film industry. While talking about Vijay Sethupathi, she said that he is a person who is down to earth, despite of being a busiest celebrity.

“After Vijay, I really admire Vijay Sethupathi as every other Tamil woman. I really feel proud to be a fan of him. Two or three years ago, I myself personally contacted him through message regarding a project. I texted him by introducing myself with the mention of my mother and all. I wrote a big story to explain how big a fan I am for him and said that I wanted to talk to him. The very next second I received a phone call from him.” said Vanitha while explaining about her first encounter with Vijay Sethupathi. She further added that Vijay Sethupathi asked her whether she have sense or not.

Watch the video below from 13th minute :

“He is such a down to earth person who expected me to introduce myself just by saying my name. He even said that he is a fan of mine and mentioned a character I done.” Vanitha said. “I went to meet him in the Super Deluxe sets and took my daughter who is also a big fan of him. He was so shy at that time as he was in a lady get up” she added.