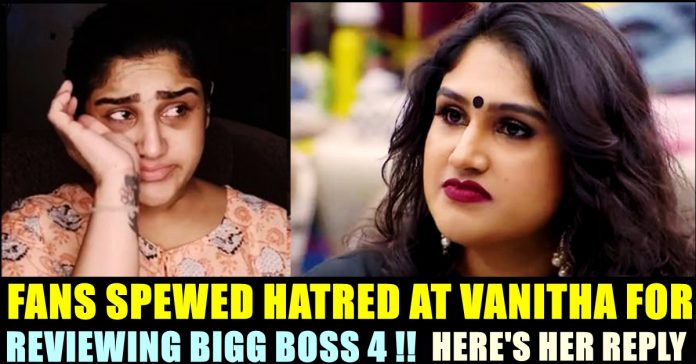 For reviewing Bigg Boss 4 after disclosing about the problems she had with Peter Paul, a number of social media users criticized Vanitha Vijayakumar saying that she pretended in the earlier video about her personal life. The actress and former Bigg Boss contestant, came up with a tweet slamming people who spewed hatred at her. She said reviewing Bigg Boss 4 is a part of her job and made it clear that it is not a social media activity.

Vanitha Vijayakumar, one of the prominent contestant of Bigg Boss season 3, is currently involved in analyzing the fourth season of the same show through her social media accounts. The actress who caught into a number of controversies after participating in the show, is now busy making contents for her youtube channel through which she is providing cooking tips. She is also collaborating with a private youtube channel named as Galatta and reviewing the ongoing episodes of Bigg Boss show.

Days ago, while declaring her break up with Peter Paul, Vanitha said that she couldn’t be active in social media platforms for few days due to the mental trauma she went through. She who looked emotionally broken due to the bad activities of Peter Paul, shed tears on air and suggested Peter Paul’s first wife to reunite with him if she wants.

Now, after a break, the actress became active and started doing her job. In the comment section of the youtube video, many internet users criticized Vanitha saying that she was faking her emotions. In a way of replying to them, Vanitha, in her official twitter account, came up with a post explaining about the nature of her job.

The “Cooku with Comali” winner said that reviewing Bigg Boss is her job not being active in social media platforms. She firmly said that she can’t stop working just because she is in pain. “This is my work not my social media activities…its my show #vanithadarbar …its a professional review on #BiggBossTamil4 as an ex contestant…for those who dont know the difference ..I can’t stop working because I’m in personal pain..I cant afford to..life goes on..” Vanitha’s tweet read.

This is my work not my social media activities…its my show #vanithadarbar …its a professional review on #BiggBossTamil4 as an ex contestant…for those who dont know the difference ..I can't stop working because I'm in personal pain..I cant afford to..life goes on.. https://t.co/AYKNutBb2A

On Tuesday night, Vanitha Vijayakumar uploaded a 50 minute long video narrating the trauma she went through after getting engaged to Peter Paul, an aspiring filmmaker. She released the video after media speculated that Vanitha has beaten Peter Paul and sent him out of her house due to his excessive alcohol consumption. Partly denying the speculation, Vanitha Vijayakumar said that Peter Paul couldn’t leave the habit of smoking cigarettes and drinking alcohol. “My heart broke into pieces realizing that he prioritizes alcohol over me” she said in her video.

The actress said that she can feel how Elizabeth could have felt while living with him. She who felt bad for losing a relationship one more time in her life, broke down on air and shed tears while saying that the love she had for Peter Paul is true. Vanitha Vijayakumar made it clear that she never received money from Peter Paul and said that she is the one who managed the expenses all these days.

Previous articleHarsha Bhogle’s Reaction On Hearing Dinesh Communicating With Varun In Tamil !! MUST WATCH
Next articleTamilnadu Youth Married Two Girls In A Month !! Got Arrested

Popular Tv actor Kumaran who is known for his appearance in Vijay Tv's "Pandiyan Stores" serial has posted an emotional video regarding the demise...