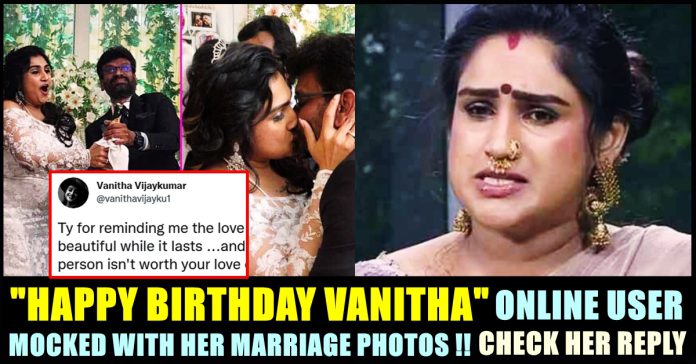 Among the hundreds of wishes Vanitha Vijayakumar had received on her birthday, an online user, to mock her, uploaded the marriage pictures of the actress and Peter Paul from whom she got separation due to his excessive alcohol drinking habit. Replying to the toxic tweet, Vanitha thanked the user for reminding about the love she always deserve. The BIGG BOSS star also said that the decision she took to part ways from Peter Paul is a sane thing to do. She went to call the tweeter as “poor life” for trying too hurt her by uploading the picture on her birthday.

Vanitha celebrated her 41st birthday on 5th of October. She has been replying to media portals, celebrities and fans who all wished for her birthday. Starting her acting career in the year 1995 through a film named as “Chandralekha” in which she paired opposite to actor Vijay, Vanitha’s personal life had always been under the scanner of media and public. After a number of failed relationships, the actress recently got married to a man named Peter Paul and broke her relationship with him due to his habit of excessive alcohol consumption.

Vanitha Vijayakumar and Peter Paul married each other on 27th of June in the year 2020. The marriage took place in the house of Vanitha Vijayakumar in a traditional Christian ceremony. The couple celebrated the ceremony with champagne bottles and kissed each other, pictures of which went viral in the social media platforms. The marriage was conducted only with close group of friends due to the COVID 19 pandemic. “He stepped in as a friend and helped me when I was lost without any technical support for my Youtube channel during the lockdown” Vanitha said about Peter Paul after marrying him.

Followed by the marriage event, a huge controversy took place as Peter paul’s first wife approached media demanding help from public to get her husband back. After a series of events, Vanitha announced that she is parting ways with the aspiring filmmaker as he started consuming excess amount of alcohol in an uninterrupted manner. The actress is currently busy signing projects and appears in Television shows as well.

Now, on her 41st birthday, a twitter user uploaded a couple pictures from her marriage event and wished her for her birthday by adding laughing emojis to mock her.

Vanitha reacted to the tweet by thanking the online user for reminding about the love she deserves. “Ty for reminding me the love I always deserve…love is beautiful while it lasts …and when you know the other person isn’t worth your love or the situation is not right walking away is the sane thing to do…and you know what for poor lives like you will never understand” her reply to the user read.

Ty for reminding me the love I always deserve…love is beautiful while it lasts …and when you know the other person isn't worth your love or the situation is not right walking away is the sane thing to do…and you know what for poor lives like you will never understand 🤣😂 https://t.co/SHdnbdgJOU

Previous articleOnline Users Trolled Shruti Haasan For Her Reply To A Fan Who Asked Her Phone Number !!
Next article“Bigil” Star Questioned Abishek Raaja For Entering Bigg Boss House After Trolling It !!

Arun Vijay Finally Opened On The Rift Between Himself & Sivakarthikeyan !!

During a press meet ahead of the release of his upcoming film "Yaanai", actor Arun Vijay replied to a question of a reporter about...

Trisha reacted to the enormous number memes that emerged as soon as her short film "Karthick Dial Seidha Enn" released. The 12 minute film...