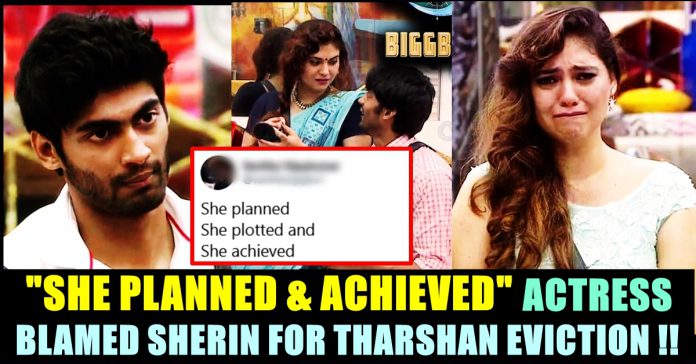 Now after his eviction, Vanitha Vijayakumar who is very much active on Twitter, posted a tweet blaming Sherin for Tharshan’s eviction. It is notable that Vanitha already made Sherin cry while being inside the house by saying that she is having an affair with Tharshan though knowing that he is in relationship with Sanam Shetty.

In this tweet Vanitha said that Sherin executed a well planned plot to be in the finals. The tweet of her read as “She planned She plotted and She achieved She was strong enough to execute it He was weak enough to fall in her trap Feeling heavy he had to be unnecessarily made to expect and believe something he didn’t ask for.”

She planned
She plotted and
She achieved
She was strong enough to execute it
He was weak enough to fall in her trap
Feeling heavy he had to be unnecessarily made to expect and believe something he didn’t ask for.#BiggBossTamil#Tharsan

While replying to one of her follower, Vanitha even said that Sherin fooled her till one point.

Sherin is the real winner.she fooled everyone including me till a point

He got a great send off today.#TharshanTheRealWinner

Next sherin target ?? Good luck for your mission…

Kamal Hasan gave Tharshan an unforgettable send off where he said that he got a fame of acting in 10 films. Confused Kamal Haasan even asked the clapping fans whether they voted Tharshan or not.

Tharshan has became a heartthrob among young girls for his charming looks and he attracted family audience for his brave behaviour inside the Bigg Boss house as well. He was lauded by Kamal Haasan in several occasions for his spirit in tasks. His friendship with Mugen also admired by many as they never brought their emotions inside the game unlike other contestants.

Previous article#RedLightChannelVijayTV Trending India Wide !! Check Out The Shocking Reason !!
Next articleFan Warned Theatre Owner To Keep His Screen Safe During FDFS Of BIGIL !! Check Out The Reply He Received !!

To Buy Smartphone For His Children’s Online Class, Man Sold His Cow !! Actor Wants To Help

This ongoing pandemic is testing the patience of human beings indeed. People from across the country are suffering with severe financial crisis due to...