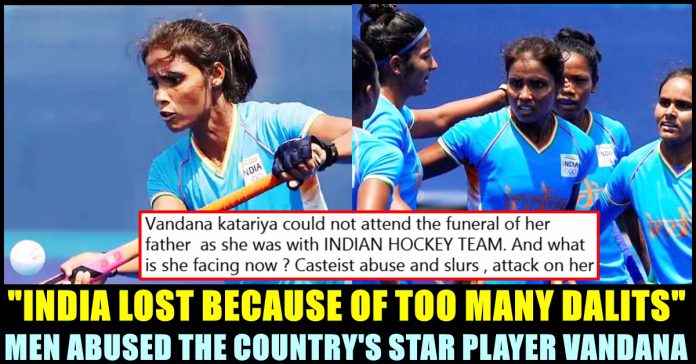 Despite of putting up a fantastic display of skill and tenacity, the Indian Women’s hockey team lost to World No. 5 Argentina at the Tokyo Games on Wednesday. Though Gurjit Kaur gave India the lead early in the semifinal match by converting a penalty corner, India;s women hockey team lost 1-2 to Argentina. India tried hard in the fourth and final quarter, however, Argentina held its own and entered the finals of the women’s hockey event in the showpiece event.

“We made history by just reaching the semifinals and now we are looking forward to the semifinals, because we don’t want to just finish here. In this tournament there’s two more games left for winning medals,” said Indian captain Rani on Tuesday. Meanwhile, a shocking report on one of the Indian hockey players facing casteist slur after losing against Argentina had surfaced in the Internet.

It has been reported that two upper caste men began circling the home of one of the Indian hockey players named Vandana katariya at Roshnabad village in Haridwar. They reportedly burst crackers, danced to mock the player in front of her house and hurled caste abuses at her family. “The team had lost because it had too many Dalit players” they shouted by standing in front of Vandana’s house. Police had arrested one of the accused as soon as the complaint was made.

Vandana’s brother Sekhar, while interacting with media said that the family was upset after the loss. “But the team went down fighting. We were proud of that”. he reportedly said. He said that they heard crackers bursting outside their house at the night of the match. “When we went outside, we saw two men from our village, dancing in front of our house. We know the, they are upper castes” Sekhar added.

The two men started abusing after seeing the family of Vandana stepping out of their house. “They used caste slurs, insulted our family and said the Indian team lost because too many Dalits have made it to the team. They went on to say that not only hockey, every other sport should keep Dalits out” Sekhar said in his complaint. “Then they took their clothes off and started dancing again, it is caste based attack” Sekhar added.

One of the man who got himself involved in such distasteful act, got detained by the police. “a country where cricketers like Vinod Kambli and Palwankar Baloo face discrimination bcoz of their caste. Google searches for PV Sindhu’s caste jumps up after she wins. and Vandana Katariya’s family has to deal with casteist abuses, after scoring a hat-trick. is this merit?” a social media user wrote reacting to the issue whereas another one said “india doesn’t deserve good players.”

a country where cricketers like Vinod Kambli and Palwankar Baloo face discrimination bcoz of their caste. Google searches for PV Sindhu’s caste jumps up after she wins. and Vandana Katariya’s family has to deal with casteist abuses, after scoring a hat-trick. is this merit?

Vandana katariya could not attend the funeral of her father as she was with INDIAN HOCKEY TEAM. And what is she facing now ? Casteist abuse and slurs , attack on her family .Attacking player like Vandana is nothing but attacking Mother India. We all should apologise to her . pic.twitter.com/WYy10ubbbU

vandana katariya, indian hockey team member was abused with caste insults and slurs because of her dalit caste. after losing the semi-finals, upper class men hurled caste abuses at her and her family and danced in mock celebration….india doesn’t deserve good players.

Casteism that Vandana Katariya is facing is nothing new. This is coming from neighbours, but a lot of times you’ll face the same from within the sports fraternity. From within associations. Even the manner in which journalists write stories and refer to you

We need to apologize as a country to Vandana Katariya. She’s worked hard and the ladies played well yesterday and no one deserves this sort of treatment. I am sorry her family had to go through this. https://t.co/oLqa6mMf0n

A YouTuber paid a hefty amount of Rs. 30 thousand to an Indian barber who did his haircut on a street in Ahmedabad. Harald...

Couple of years ago, a baseless speculation regarding the relationship between Singer Pragathi and Kollywood actor Ashok Selvan brewed up in Internet. On seeing...