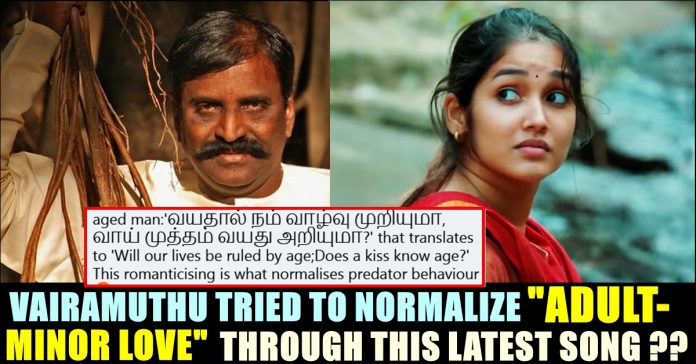 “Before the might of love, when caste, religion, race and shatter, will age matter ?” the English translation of the the song’s one of the phrases says. The song which starts with describing the nature, slowly turns out the teenage girl expressing her admiration towards the aged character. When a character questions her emotions towards him and discourages the teenage girl saying that the elderly man is a mad one, she replies saying “He is not mad”.

“My lover, does love bother about age? Will age put an end to our lives? Liplocks are not bound by age… Isn’t the moon the oldest of all, but this young lily will bloom when asked by the moon”. translation of the Tamil lyrics conveys. The song features 16 year old child artist Anikha Suresndran who is known for sharing space with some of the leading actors such as Nayanthara, Ajith kumar, Amitabh Bhachchan, Mammooty etc. “there is no father in my life, but I want a husband like a father” the girl sings, admiring the man who is playing with children and enjoying the nature.

Watch the video song below :

The song because a subject to huge controversy due to its problematic lyrics. “Filed complaint with
National Commission for Protection of Child Rights seeking action against Mr. Vairamuthu, Tamil film lyricist for encouraging Pedophilic attitude through his lyrics for a video song titled ‘En Kadhala’ as part of the album ‘Naatpadu Theral’ uploaded on Youtube as a project for the Kalaignar TV.” said Legal Rights Protection Forum in its tweet.

Several other social media users including Chinmayi condemned Vairamuthu for his lyrics.

Looks like Mr. Vairamuthu has come out with a song which speaks about a school girl falling in love with a middle aged man.
"வயதால் நம் வாழ்வு முறியுமா, வாய் முத்தம் வயது அறியுமா?"
Sexual grooming 101.
Thank you, Vignesh, for this post. https://t.co/9hX1hlOAeP

In that new Vairamuthu song (out on his YouTube channel) that people are talking about, the guy I liked the most is that stranger at the beginning, who disses the 'loves-u' and walks away before the song begins. I think it's a metaphor for what we should also be doing.

what the hell! En Kadhala is problematic on so many levels! That's blatant pedophilia. It's unsurprising that Vairamuthu wrote the lyrics, that man is creeeeepy. Don't make such songs for god's sake.

This song normalises predatory behavior/ grooming. At a time when so many cases are coming out, shouldn’t some action be taken against this video/writer? CSA doesn’t happen in the abstract. We need to dismantle the environment that enables it @Anbil_Maheshhttps://t.co/6hncW3Pxtk

🙂🙂🙂🙂
We are talking about child sexual harassment for past 2 days, but this accused piece of shitt famous Tamil song write has now released THE MOST PROBLEMATIC PEDOPHILE ALBUM song with a literal 16 yr old kid acting in it.

This song called 'En Kadhala' promoting Pedophilia & which has very problematic lyrics and visuals must be banned. The person who wrote this is a #MeToo accused & he hasn't been investigated for the allegations from a few years back. @Chinmayi @NCWIndiahttps://t.co/02Ty2LqQLj

WATCH : Yash Opened About Competing With “Beast” For The First Time!!

Kannada actor Yash who gained fame across the country through his film "KGF", opened about his film competing with Vijay's "Beast" in the trailer...