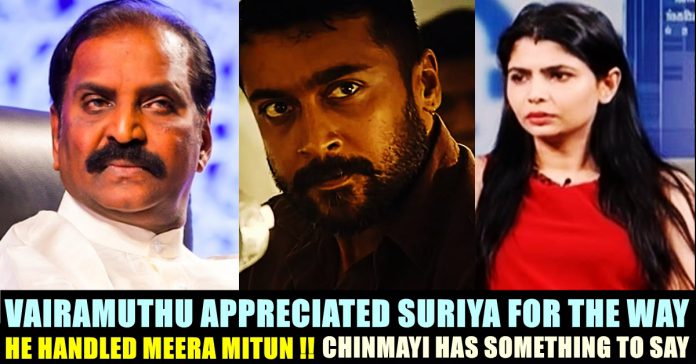 Vairamuthu appreciated actor Suriya for the way he approached the issue created by Meera Mitun. The Tamil lyricist tagged the actor’s official twitter account to appreciate him and compared Meera Mitun with foam and semiotically denoted Suriya as river. His tweet got the attention of singer Chinmayi who has been accusing him of molesting girls for years now and she reacted to it.

After seeing the press note released by legendary filmmaker Bharathi Raja regarding the derogatory comments of Meera Mitun, actor Suriya reacted to the issue being created by Meera Mitun. He reiterated a tweet he himself posted in the year 2018 when anchors of Sun music made a insensitive comments on him and said that he wants his fans to involve in constructive activities.

Degrading the acting skills of actor Suriya, Meera Mitun didn’t spare the personal life of the actor. Her baseless accusations irked her fans which made them to make abusive comments against her in social media platforms. She who has been making derogatory comments against actors Vijay and Suriya for past few weeks, said that they both are the product of Nepotism and involving verbal spat with the fans of the actors in Twitter.

Appreciating this gesture from the actor, Vairamuthu said “The way Suriya approached the baseless accusations is good. Matured people won’t panic while reacting to such issues. I appreciate him. River won’t intermingle with foam in the shore”

This tweet garnered huge reception as Suriya fans got excited on seeing their idol getting appreciated. However, many of the twitter users who saw the tweet mentioned Chinmayi and asked her to state her opinion on his tweet.

Replying to a tweet of a user who asked her to comment on the tweet posted by Vairamuthu, Chinmayi said that so many people are questioning him on her behalf but there is no answer from him yet. “He won’t become a good man if he keeps appreciatiating good men”. she said. “Naane kaettuirukkanumnra avasyam illa. Naraiyya paeru kaettutaanga. Badhila thaan kaanOam. Nallavanga paaraattuna mattum nallavanga aagida maatanga :)” her reply read.

Chinmayi along with 14 other women has been calling out Vairamuthu for allegedly involving in sexual harassment. She became the representative of “Me Too” campaign in South India by accusing the politically influential lyricist. Comment your views on Vairamuthu’s tweet and Chinmayi’s reply to it !!