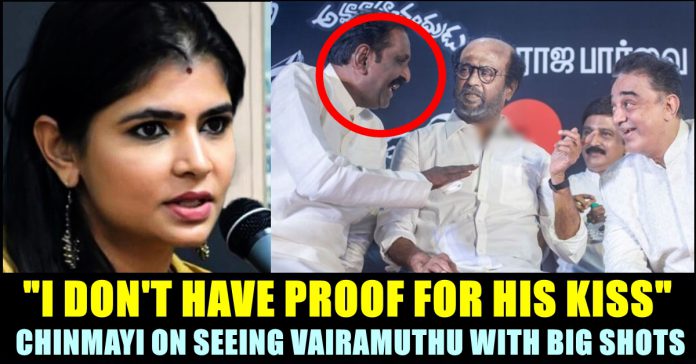 The duo also garlanded a portrait of writer and K. Balachander’s close collaborator, Ananthu, inside the office premises, which is a stone’s throw away from Kamal Haasan’s Eldams Road office, which has been turned into his party office since he started Makkal Needhi Maiam.

The event was attended by the actor’s close associates actors Nasser, Ramesh Arvind, Santhana Bharathi, filmmaker K. S. Ravikumar, Mani Ratnam and the family of the late K. Balachander. Popular lyricist Vairamuthu also took part in the event and was seen sitting along with Rajinikanth and Kamal Haasan throughout the show.

On seeing his presence in the event, many tagged singer Chinmayi as she accused him of molestation. Being one of the prominent lyricist of Tamil cinema, Vairamuthu recently caught up in a major controversy named #MeToo where he was accused by singer Chinmayi for sexual harassment.

Literally the who's who of Tamil film industry – Kamal Hassan, Rajinikanth, Mani Ratnam etc. This is irresponsible, incredibly demeaning and demotivating, sends a horrendously poor signal about normalizing 🙁 https://t.co/mA00taEvHa

To that tweet Chinmayi said that Kamal Haasan appointed as a candidate Snehan who called MeToo a publicity stunt. She even added an hashtag saying “They are all the same”

When one of a fan of Kamal Haasan asked Chinmayi to prove before accusing him. To that Chinmayi said that she has no proof of Vairamuthu kissing her in his office. “Sorry I dont have proof of Vairamuthu planting a kiss on me at his office. Your repeatedly asking me for proof as if Vairamuthu called and audience and leaves witnesses for this. You are out of your mind. Avan avanuku vandha teriyjm kaachalum noayum.” read the reply of the singer.

Sorry I dont have proof of Vairamuthu planting a kiss on me at his office. Your repeatedly asking me for proof as if Vairamuthu called and audience and leaves witnesses for this. You are out of your mind. Avan avanuku vandha teriyjm kaachalum noayum.

Here’s her tweets regarding the same :

More Than 60,000 Traffic Violators To Lose Their License In Chennai !! SHOCKING !!