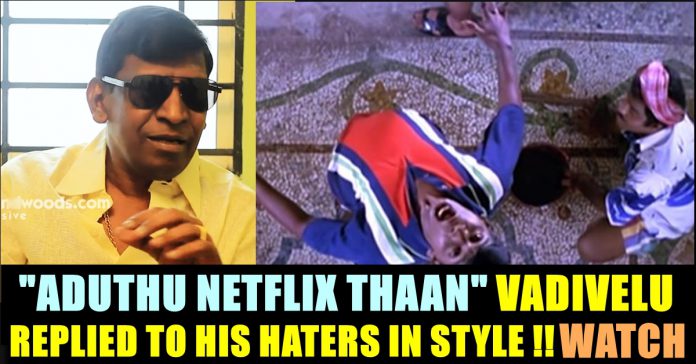 First video interview of Vadivelu after the sensational Nesamani trend has been released by Behindwoods. If you have not been living under the rock, you probably must have seen #Pray_for_Nesamani trending online this week. While Netizens around the country were busy praying for the well-being of Nesamani, it left several others quite baffled.

As the trend caused a laughing riot online, the most awaited video interview of Vadivelu has released. In the interview Vadivelu is seen interacting with host by sharing the making of Nesamani and his own inputs for the character.

The comedy actor shared many thing that happened during the making of Nesamani including how hard actor Vijay struggled to control his laughter while doing their combination scenes. Heaping all praise to director Siddiqui, Vadivelu says ” I wouldn’t like to work with someone who asks me to do what he says. Comedy would not work when you force it. It must have some of the inputs of the comedians”

“Vaigai Puyal” revealed that there are many inputs of him for the character Nesamani. He also thanked Vignesh because of whom the character went viral worldwide. It all started when a facebook page called “Civil Engineering Learners” posted a picture of a hammer and asked it’s followers to comment the name of it in their country. Vignesh Prabhakaran, An ardent Vadivelu fan immediately connected it with a comedy scene from the movie “Friends” which was released in 2001.

While addressing about his inputs in the movie, Vadivelu mentioned a particular scene where he responds to Devayani, the female lead of the movie. When she calls Radha Ravi as “Chithappaa”, Vadivelu who is also “Chithappa” for Ramesh Kanna and his friends will respond imemdiately which will crack up anyone. The actor said that he got applauded from the whole crew in the shooting spot for that improvisation.

He also shared about the issues he had with 23-m Pulikesi movie crew and Chimbu Devan who is directing the second part of it in the interview. Not only meme creators, the storm of Nesamani hit celebrities from the Kollywood industry as well. The hilarious posts helped many people to laugh their heart out. Starting from Harbhajan Singh, Chennai Super Kings spinner to Tamil actor Siddharth, many celebrities reacted on Nesamani’s injury.

Vadivelu reported that he is going to feature in Netflix as one of his project and said that he is called by Hollywood production companies. The actor thanked every meme creators for the reach of Nesamani at the end of his interview.

Previous articleSelvaraghavan Answered To A Fan’s Most Complicated Question !! Check Out !!
Next articleA.R Rahman, First To React On The New Draft Policy !! Check Reactions !!

G V Prakash Blocked This User After Seeing A Meme??