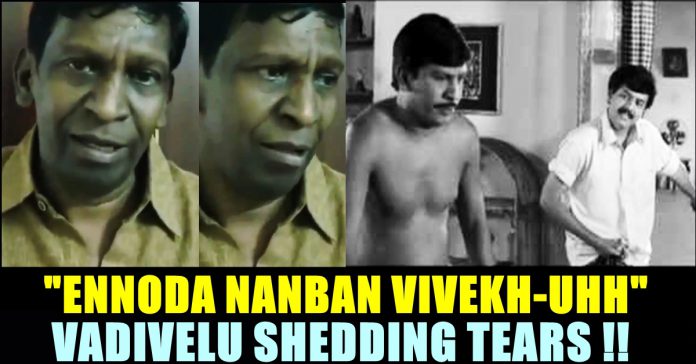 Now, a video of actor Vadivelu shedding tears for the demise of his dear friend made fans go extremely emotional. In the video, Vadivelu who looks devastated, shares his fond memories with his long time friend and says that he hasn’t gone anywhere but living among us.

“I have come to know about the demise of my friend Vivekh through news channels. It is said that he died due to heart attack and I got extremely shocked. We both acted together in many films.” says Vadivelu and breathes heavily in sorrow.

The actor says that grief gags his throat while talking about Vivekh and sheds tears. “He is a good human. His thoughts on Public welfare is immense. He was also very close to Abdul Kalaam sir. He has been creating awareness about social issues and is very much known for planting trees. We both were thick friends and were close to each other” said the actor in a shivering voice.

“No one could be as transparent as Vivekh. Of all the crores of my fans, he is one among them and I am one of his fans as well.” said Vadivelu and lauded the speaking abilities of Vivekh. “He doesn’t deserve a death like this and it is painful. I couldn’t bear the pain. I don’t know what to say at this time. I couldn’t make my presence for his funeral as I am in Madurai with my mother. I offer my heartfelt condolences for his demise. I want you all to be strong. Vivkeh hasn’t gone anywhere. He is with us. I pray for his soul to rest in peace” Vadivelu said in the video.

On the wee hours of Saturday, actor Vivekh who predominantly appeared in Tamil films, died in the hospital after suffering a cardiac arrest. On the morning of Friday, an unconscious Vivekh was brought to the SIMS hospital in Chennai. He reportedly suffered a cardiac arrest due to a 100% blockage in heart vessel. It is reported that the actor was revived and underwent an emergency coronary angiogram followed by angioplasty. He was then put on Extracorporeal Membrane Oxygenation support to circulate blood through an artificial lung back into the bloodstream.

In a way of clearing the air on whether Vivekh suffered cardiac arrest due to the COVID 19 vaccine shot he took on Thursday, Dr. Raju Sivasamy, vice president of SIMS hospital said that Vivekh’s condition was not related to the vaccine he took. “It took nearly an hour for the doctors to remove the block. He was then put on an ECMO. His is an acute coronary syndrome with cardiogenic shock and not related to the vaccine,” Dr. Raju Sivasamy said and confirmed that Vivekh wasn’t infected with COVID 19 virus.