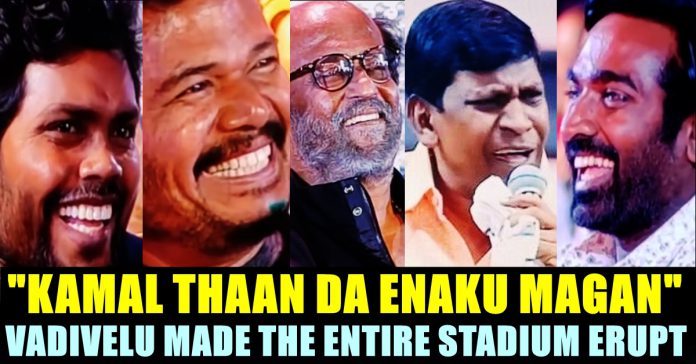 Vadivelu Made The Entire Stadium To Erupt In Laughter !! WATCH VIDEO !!

The grand event of Kamal Haasan’s 60 years in film industry took place at Nehru Indoor Stadium and completed successfully with the participation of many stars from Indian film industry. Starting from Vijay Sethupathi to Superstar Rajinikanth, almost every stars of Kollywood took part of the event and made it a huge success.

The comedy actor who is a darling of Tamil meme nation, made everyone in the stadium including Manirathnam, Vijay Sethupathi, Pa.Ranjith, P.C Sriram, Karthi, Prabhu, Vikram Prabhu, Meena to laugh their heart out through his speech. Even filmmaker Shankar who is rumoured to be having an issue with Vadivelu, was seen laughing out loud during the speech of “Vagaipuyal”.

As the grand event is about to be telecasted soon in Vijay TV, a glimpse of Vadivelu’s speech has been captured in cell phone and is doing rounds in social media. In the video we can see the comedy actor narrating about his experience in the shooting spot of “Devar Magan” in which he essayed a role of “Isakki” along with Kamal Haasan and veteran actor Shivaji Ganesan.

In his speech, Vadivelu opened on how he over-performed a scene where Shivaji Ganesan is supposed to be acting as a dead body. “Me and Sangili Murugan were crying our lungs out with inappropriate dialogues in order to show our acting skills. Suddenly Shivaji Ganesan who was supposed to be like a dead body got up and made us realize that we are not his sons in the movie and the only son for him in the movie is Kamal Haasan. After ordering us to sit quiet with our clothes in our mouth around the corner, he (Shivaji Ganesan) indicated something to P.C Sriram (Cinematographer of the movie) and when I watched the movie in theatre, we (Vadivelu and Sangili Murugan) were not even in the frame” said Vadivelu which made the entire stadium to erupt in Laughter.

Presence of Vadivelu in the event of Kamal 60 made the news of his part in Kamal’s upcoming movie “Thalaivan Irukkindraan” true. The movie which is rumoured to be a sequel of “Devar Magan”, a blockbuster movie released in 1992, Vadivelu is going to play the role of “Isakki” again, according to reports.

The comedy actor even wished Kamal Haasan for his political party and said that he would pray for him in the Ayyanal Temple in Paramakudi which is the home town of both of them. What do you think on this speech of the comedy actor ?? Comment your views below !!

Previous articleSamantha Replied To Those Who Questioned About Her Pregnancy !!
Next articleJUST IN : Vijay Mimicked Like Lokesh Kanagaraj For This Reason !!

Vijayalakshmi Agathiyan is a Tamil actress, the daughter of the national award-winning Tamil movie director Agathiyan. This beautiful, petite Chennai-based actress, who has acted in...

After 1020 long days, Virat Kohli, the modern-day batting great smashed his 71st century only to leave the fans of Indian cricket team to...

RJ Vignesh Revealed Why He Said Mr.Local As A Good Movie !! WATCH VIDEO !!