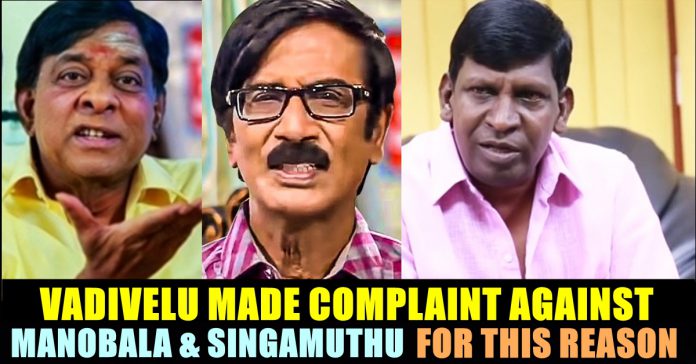 Vadivelu is a veteran comedian in Tamil cinema who is not very much active in his field currently. Being one of the celebrated comedian among Tamil audience,Vadivelu is expected to make a comeback soon. Now, the comedy actor has complained against his long time colleague Singamuthu and actor Manobala to a special officer in Nadigar sangam.

In the interaction Singamuthu says that he is the one who increased the salary of Vadivelu. “He is an excellent artist. The only thing he lacks is, that he didn’t read good books and didn’t had friendship with good people. The place he grew up spoiled his career. He doesn’t know whom to respect. You won’t believe if I say now. Vadivelu invested Rs.1.5 crores and I earned him Rs.200 crores profit. He bought a land from Rs.8 lakh and sold it for Rs.22 crores recently. I still don’t understand how I owe him Rs.7 crores. If I had Rs.7 crores I would have settled in Singapore with family.” Singamuthu said in his interaction.” said Singamuthu.

He said that Vadivelu is still running the case just for namesake. “This case will continue for 10 more years. His body is weak now itself” laughed Singamuthu in the interaction along with Manobala.

Watch their interaction below :

Vadivelu, in his complaint to Nadigar Sangam, Vadivelu reportedly said “I have been a member of South India’s actor’s association for 30 long years. In a youtube channel named as “Waste Paper” which is owned by Manobala, Singamuthu was asked to answer about few questions regarding me. While answering, Singamuthu abused me and degraded me. He even said false stories to ruin my reputation.”

“He shared that video in a whatsapp group named as SIAA in which many actors are active. I got mentally depressed due to his activities. It is notable that there is a fraudulent case regarding a land is being investigated by the court. So I request Nadigar Sangam to take appropriate action against Manobala and Singamuthu under rule number 13.” Vadivelu wrote in his letter.

In an earlier interview to Behindwoods, Singamuthu said “Vadivelu will delay deliberately and blame directors for it. He won’t return money as well. As he is getting salary on daily basis, Vadivelu will go to set at 12 pm to extend the dates in order to get more money. He even made his managers suffer a lot to an extent both of his managers die at the age of 48”

Singamuthu even said that Vadivelu denied having son and said to someone that his son is his niece. He also alleged that Vadivelu got beaten by women inside rooms for wrong reasons. (Also Read : Is This The True Face Of Vadivelu ?? Shocking Statements From His Co-Star Singamuthu !!)