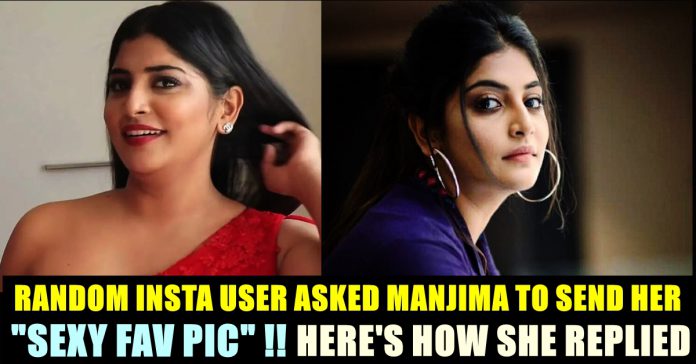 Amidst this lockdown situation, several celebrities conducted chat session with their followers in social media to get themselves engaged. People are glued to Internet to kill the quarantine period. Followers trying everything to get a reply from their favourite celebrity during such sessions is something which is very common nowadays. Some praise them to get a reply and some would have the guts to abuse them to grab the attention. Now, in a recent chat session conducted by Manjima Mohan, one of a follower asked her to share her sexiest picture and strangely he received a reply from the actress.

Manjima Mohan is an actress who got introduced through films through a Malayalam film named as “Oru Vadakkan Selfie” which had Nivin Pauly in the lead. Gautham Menon introduced her in Tamil film industry through his adventurous love action film “Achcham Enbathu Madamayada”. She paired with Simbu in the film and went on to act in few more films such as Devarattam, Ippadai Vellum, Sathriyan etc. She who met with an accident forced to take a break from the film industry and is going to make a come back through Vishnu Vishal’s upcoming film “FIR”.

The actress who is very much active in social media platforms, is currently enjoying 16 lakh followers in Instagram. In a recent chat session she conducted in the photo posting platform, she answered to many of her followers who asked her about her skin care routine, last watched film etc. One of a follower asked the actress to share her “favourite sexy picture” of herself.

She who could have simply avoided his question, made an effort to search her childhood picture in order to show it to the random user. In the picture we could see a six months old Manjima posing for the picture in a most adorable way. Check out the screenshot of her reply here :

This is not the first time Manjima shutting down a troll in online medium. Earlier, during the initial period of lockdown, an online user abused the actress for advising people to stay in home.

While reply to him, The actress who said that she would ignore such tweets, showed it to her followers to let them know what kind of replies she is receiving for asking people to stay at home. To the abuser, Manjima said that it is not easy for herself to stay at home. “Money doesn’t fall from the sky for us!” She said in her reply.

And then we have people like this! I usually don't reply to these kinda tweets but this is what I get for asking people to stay at home. If you thinks it's easy for anybody to stay at home without going for work you are wrong bro! Money doesn't fall from the sky for us! https://t.co/U3RMzXegqv