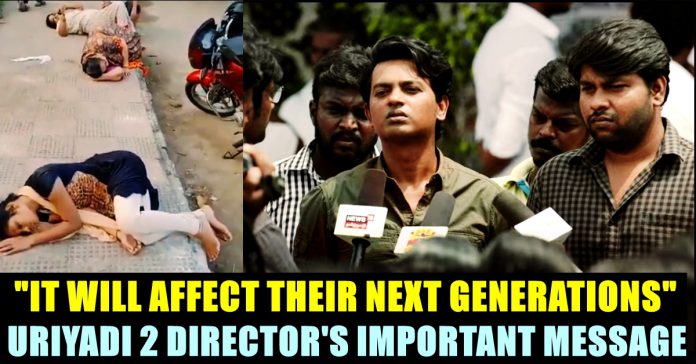 Director Vijaya Kumar who is known for making Uriyadi series has made an important statement regarding the Gas leak that killed 10 people in Visakhapatnam. The filmmaker’s second film depicted the aftermath of Bhopal disaster which caused the death of 2,259 people due to gas leak. Over 500,000 people were exposed to methyl isocyanate (MIC) gas due to this incident which happened in the year 1984. The highly toxic substance made its way into and around the small towns located near the plant.

Now, the filmmaker has reacted to this similar incident which took place in Visakhapatnam. During the wee hours of Thursday, a gas leak from a chemical plant leaked and killed 10 people so far which includes two senior citizens and an 8 year old girl. More than 5,000 people fell sick after the leak happened at LG Polymers industry at RR Venkatapuram near Naduthota area close to Gopalapatnam.

This incident created panic among the locals in the 3 km radius area. Many disturbing visuals of people collapsing and facing breathing difficulties are surfacing in social media platforms. Reports suggests that people are experiencing rashes on their body and soar eyes.

LG chem, based in South Korea, that manages the LG polymers in Visakhapatnam has said that the gas leak situation is now under control. They said that they are exploring all the ways to provide speedy treatment for those who suffer from inhaling the elaked gas. “We are investigating the extent of damage and exact cause of the elak and death” they said to the media. An FIR has been registered in the case. “The gas leak was an accident. They were strictly following all protocols. Investigation is underway. Forensic teams are also being sent to the spot.” said Andhra Pradesh DGP Damodar Gowtam Sawang.

Now, Vijaya kumar, while reacting to the news posted a long note. The filmmaker has informed people about the long term effect of a styrene gas. “Styrene is reasonably anticipated to be a human carcinogen, and there is no clear study about the long term effects of it in human body. Detailed study has to be done by getting the report of chemical reaction and gases leaked from factory lab and treatment has to devised accordingly.” his post read. He said that people who are affected by it should be treated it proper medical assistance to stop them developing any disease in the future. “The biggest danger of chemical exposure is, the damage doesn’t get over in one day. It often lasts several years and even continue to the next generation of the victims.” Vijay said through his post and asked government to dedicate special ward to the victims. Attaching few links of wikipedia pages regarding the aftermaths of a chemical gas leak, Vijay hoped innocent animals are safe.

Watch the teaser of his film Uriyadi 2 below :

Comment your views on these insights provided by the filmmaker below !!