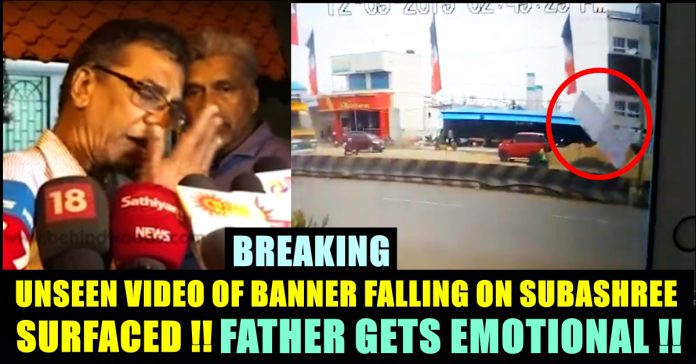 Unseen Video Of Subashree Getting Killed By Illegal Banner !! Father Gets Emotional !!

The news of Subashree’s death is creating massive outrage against the ruling party as a banner associated to them caused the accident. The 23 year old techie is a single daughter for her parents.

The woman, who was her way back home from her office, was wearing a helmet at the time of the accident, eyewitnesses said. Now, the video of the banner which falling on her scooter has been released. In the video we can see the banner waving for a long time without proper balance.

Then it falls on her way and the Lorry which is coming very close, ran over her and killed. Few blamed Subashree by saying that she died because of her carelessness and negligence. In a way of proving them wrong, the video shows the banner falling on her scooter in a way of blocking her vision.

“The hoardings are unauthorised. We are taking action against those who put them up,” C Maheswari, Joint Commissioner of Police of Chennai South region, told NDTV. Officials also sealed the shop which printed the banner printing shop. Popular Actor Slammed Officials For Banning The Banner Printing Store Instead Taking Action Against The Politicians !!

Previous articlePopular Actor Slammed Officials For Banning The Banner Printing Store Instead Taking Action Against The Politicians !!
Next articleSunaina & Yogi Babu To Team Up For This New Science Fiction ?? EXCLUSIVE !!

Cricketer of Team Srilanka Danushka Gunathilaka who got arrested by Sydney Police for raping a woman, has been accused of choking her three times...